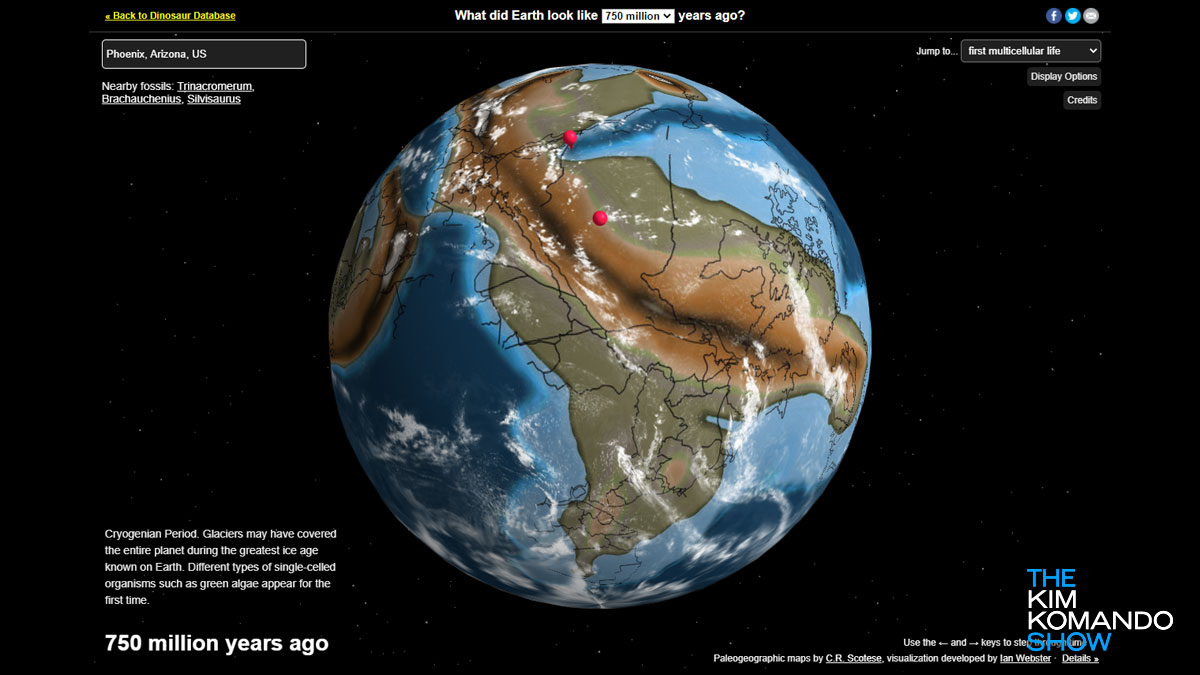 If you’ve ever gone on a hike in a remote area or taken a long walk in your hometown, you may have come across some artifacts that point to what life looked like before humans roamed the Earth. Perhaps you’ve found some fossils in an old shale outcropping or stumbled across the cliff drawings left behind from an ancient civilization.

The Earth has changed radically over the last 750 million years, from continents dividing to dinosaurs ruling the Earth and the evolution of man. Historical artifacts like these can help us imagine what life looked before we existed, but they can’t give us a full picture of what your city or hometown looked like through its earliest phases. Speaking of dinosaurs. Tap or click here to see the toy dinosaur that captured the imagination of the nation on a recent SpaceX flight.

A new interactive online map created by a California-based paleontologist can give you helpful historical information. This map lets you trace your hometown and any other area on the globe through millions of years of continental drift — from the first signs of life to the end of dinosaurs and beyond.

What’s on the map?

If you’re curious about how your town shifted through the continental divide or want to know what dinosaurs roamed your streets, the new map, found on Dinosaurpictures.org, lets you follow any location in the world through the different periods in history, from the early Cambrian Period to the Ordovician Period and beyond.

Related: Use Google to see dinosaurs in the real world

This interactive map depicts Earth’s evolution over the last 750 million years, offering information on dinosaurs that roamed in the areas you choose to when the first flower bloomed, and even what types of fish were swimming in the sea during each period of time.

Ian Webster, who designed the map, told CNN that it was “meant to spark fascination and hopefully respect for the scientists that work every day to better understand our world and its past.”

According to Webster, the map was built as a web application and visualizes geological models created by geologist and paleogeographer Christopher Scotese. Scotese’s models depict the last 750 million years of plate tectonic development, starting from shortly after green algae evolved in the Earth’s oceans.

If you want to see where your hometown was located on the Pangea supercontinent, it’s possible with this map — or you can see what your city looked like at the time first primates roamed Earth.

The map also contains fun surprises, like how the U.S. used to be split by a shallow sea and how the Appalachians used to be very tall mountains comparable to the Himalayas. Webster also notes that you may be surprised to find that Florida used to be submerged (under more than just swamps).

You may also like: Use AR to measure anything with your smartphone

The map defaults to the first multicellular life, but you can change it to first shells, first coral reefs, or a number of other options with the drop-down menu in the upper right-hand corner of the screen.

You can change the location you’re looking at on the map by typing it into the box on the upper left-hand side of the screen. Type in the city or town you want, set the time frame you want to look at on the globe and the program will add a pinpoint on the area on the globe so that you can see what the area looked like during that period.

You also have the option to change display options by rotating the globe, showing clouds, showing the equator and inputting bright lighting. This can be done by clicking on the display options menu under the drop-down menu on the right-hand side of the screen.

When you choose a city and a time period, the map will also drop a list of the nearby fossils from that time period in the upper left-hand corner of the screen. For example, when you input New York City into the box and change the period in the drop-down menu to “first vertebrates” on the right, the map will drop a pin in the location and the list of nearby fossils appear.

The nearby fossils for NYC during this period include Grallator, Pteranodon, and Dryptosaurus, according to the map, and more information will appear on the bottom left of the screen.

In this case, it pulls up information on the Ordovician Period, which is a time when the “seas are diverse and the first coral reefs emerge. Algae is the only multicellular plant, and there is still no complex life on land. Jawless fishes, the first vertebrates, appear,” according to the map.

The map is really interesting and you may find yourself spending tons of time learning cool historical facts. Check it out and see what you can find for yourself. You’ll have loads of fun.