The Google Play Store is an interesting place to find applications. It offers a far more diverse selection of programs than Apple’s App Store, but the trade-off is there’s no telling which ones are infected with malware.

In the past year alone, we’ve covered five separate stories where Google has been outed for hosting malware in their app store. These phony apps featured a number of hostile symptoms ranging from stealing private customer data all the way to charging customers for subscriptions they never signed up for. Now, it looks as if history is repeating itself — again.

A brand new batch of infected apps have been discovered on the Google Play Store, some of them with millions of active installs to their name. Here’s what security researchers found, as well as what you should keep an eye out for the next time you try to download an app from Google’s risk-filled store: 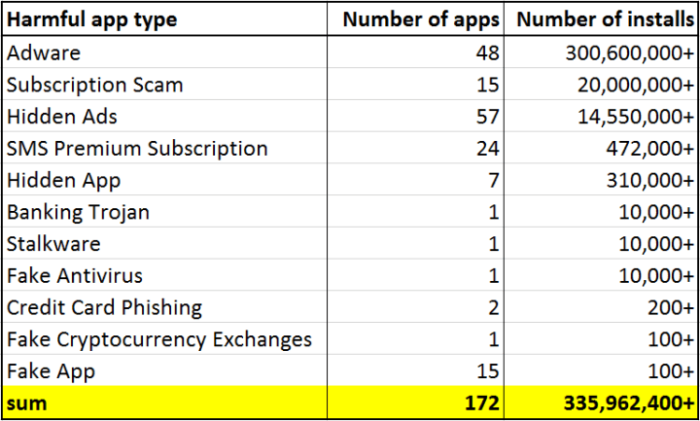 According to new discoveries posted by antivirus researcher Lukas Stefanko, a new round of malware-infected apps has been discovered and outed on the Google Play Store. Many of these malicious apps were reasonably popular programs, with some boasting a combined total of over 300 million installs.

Most of these applications function by running advertising fraud such as auto-clicking and background ad refreshing, while others were unmistakable trojans that compromised user’s phones. Two of them also performed outright credit card phishing by tricking users into giving up their account information.

Google has since deleted most of these programs, but several managed to have their names captured so users still have a chance to delete them from their devices. The known fraudulent apps you should delete from your phone are as follows:

How do I know if anything on Google Play is safe anymore?

Sadly, because Google seems to have no interest in seriously moderating their platform, it’s up to tech writers and cybersecurity researchers to make malware discoveries and keep users informed.

Users can still protect themselves by keeping a sharp eye out for red flags when downloading apps from unknown developers.

Typically, apps with glitchy or intrusive advertisements are doing more under the surface than you might expect, and major pop-ups that interfere with app behavior tends to be a bad sign. Additionally, look for signs like apps moving icons on their own, poor user interface or broken English in the program’s design. All of these point to an application that may be doing shady things behind the scenes.

Until Google decide’s enough is enough with their app store woes, the burden lies on us to police our own downloads and keep our devices safe. Since Google is one of the largest and most profitable companies on Earth, it’s unreasonable to assume this is out of their control. They just have to be willing to pay attention.