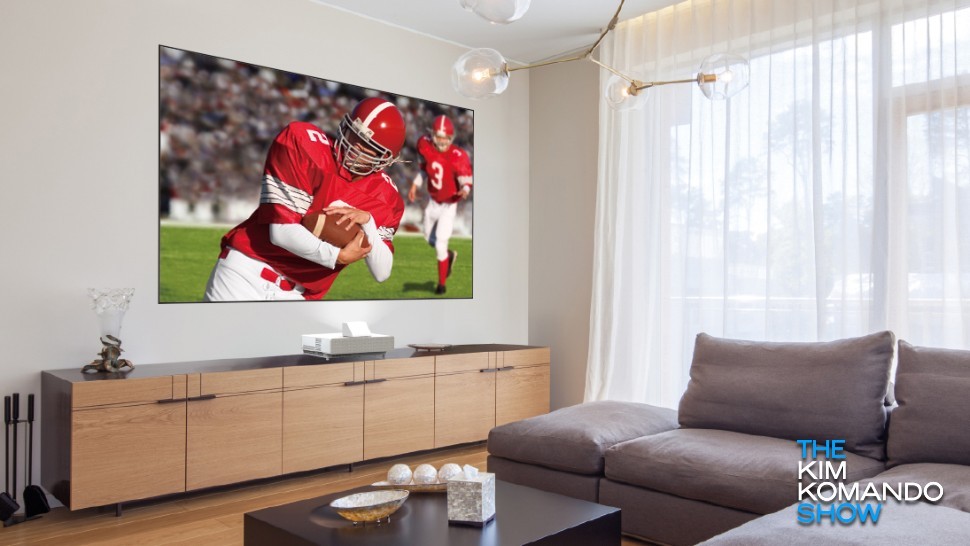 Big TVs are the norm nowadays. In previous years, a screen just over 24-inches was enough to set you back a paycheck or two. But now, you’d be hard-pressed to find smaller monitors in most mainstream electronics stores. Throw in some smart technology and you have a recipe for an amazing home theater setup.

But, if you’re looking for a true theatrical experience, there’s nothing else like an in-home projector system. Not only does it capture the feeling of going to the movies, but you can also easily blow up the picture to massive sizes. Sadly, there is usually a trade-off in picture quality and light leakage. Plus, you can’t walk in front of the stream without throwing your shadow over what you’re watching.

Now, get ready to forget everything you ever thought you knew about projectors. Epson has developed a brand new type of short-range projector that not only gives you crystal-clear images but can even be placed right in front of the wall it’s projecting on. How were they even able to accomplish this? Read on to learn more about the tricky engineering Epson used to bring the full-blown movie theater experience into your living room.

The Epson LS500 breaks all the rules of projectors

When you think of a home theater projector, the mind immediately goes to ceiling mounts, clamps and a blinding light shining from above. Well, that’s not the case at all with Epson’s LS500 series model.

As an entry into the fast-growing category of short-throw (read: close range) projectors, the LS500 requires no special attachments, wiring arrangements or enclosures. All you need to do is plug it in, set up the included screen and go. The device’s technological wizardry takes care of the rest.

Ordinarily, short-throw projectors offer a trade-off of their own in exchange for the lack of space they take up. Since they use an advanced array of mirrors in order to get the image just right for their angle of projection, this means they are increasingly vulnerable to interference from overhead lights. This can make the images appear grainy or washed out, in most cases.

But not the LS500. Instead, the secret lies in the included screen that you mount on your wall. Unlike ordinary projector screens, the film used for Epson’s contains microscopic lenses that reflect light in particular ways to eliminate interference. The result is a clear, crisp image that isn’t drowned out by ambient lighting.

How much does it cost, and how good of a picture are we talking?

Let’s get the pricing out of the way first, because it’s a pretty big deal compared to the competition. For a 100-inch screen and projector, the LS500 goes for $4,999, with the 120-inch model costing $5,999. That might sound expensive, but when you consider that a similar Sony 4K projector costs nearly $25,000, Epson’s device looks like an absolute steal.

But it does bear mentioning that some sacrifices are made in order to bring you such a stunning picture in such an inexpensive package. Namely, the Epson projector generates images in what the company calls “4K-Pro UHD.”

In other words, it’s not generating true 4K like the Sony projector is, but the result is extremely close in quality. The secret lies in how the projector processes images, which requires the onboard computer to refresh all video at a slightly higher rate than normal. Call it “3½K” quality, if you will.

The result, however, is an image that is similar enough to 4K to the point where most people won’t even notice the slight difference in clarity. In a world where 4K projectors can run you into quadruple-digits, it’s a worthwhile trade.

Plus, it’s hard to beat a screen that’s 100 inches right off the bat. But that’s the power of a projector versus a standard TV. Speaking of which, did you know a 100-inch TV costs about $10,000 on its own?

If you’re someone who loves taking the feel of the movies home with them, or even if you just enjoy catching the big game on the biggest possible screen, you may want to look into switching to a projector instead of a heavy TV set. If this kind of quality tech can get this cheap today, who knows where we’ll be 10 years from now.