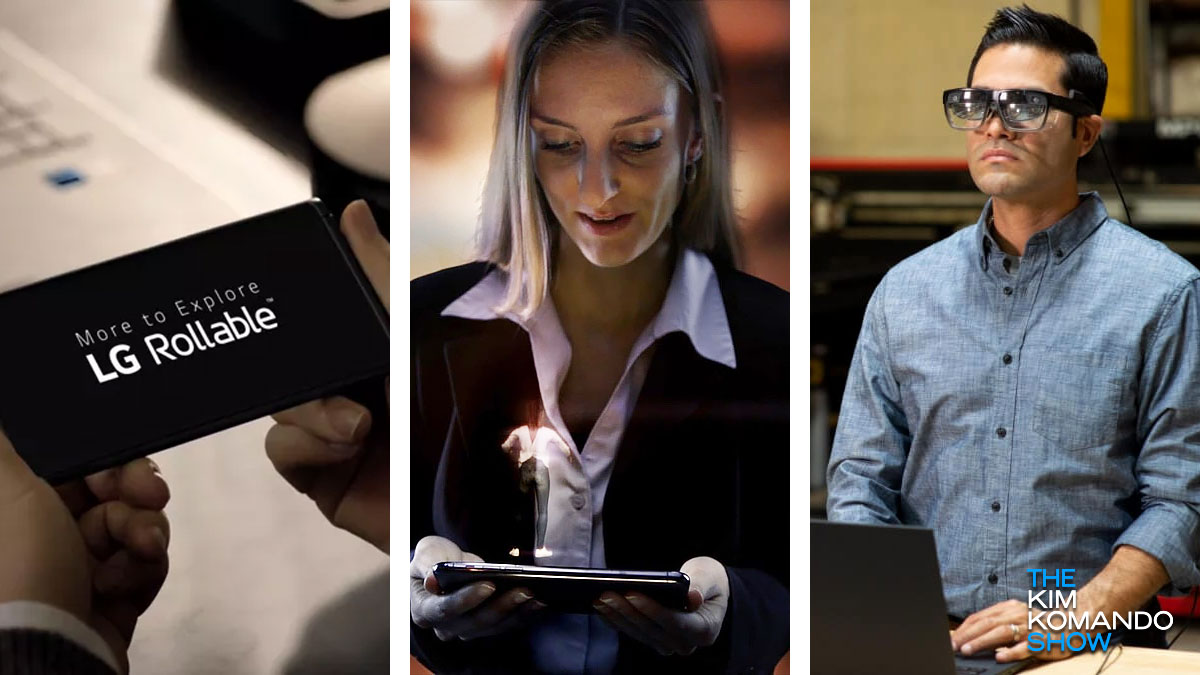 We love it when the Consumer Electronics Show rolls around. There are always so many wacky, interesting and innovative products unveiled during this event. During CES 2020, we saw tons of awesome and strange new products.

CES, which has been held annually since the late 1960s, is the time when tech innovators showcase all of the cool and surprising tech toys that are going to hit the market. This show has been held in Las Vegas in recent years, but this year, it’s completely virtual for the first time in history, thanks to COVID-19.

That doesn’t mean there aren’t cool unveilings to note, though. CES 2021 is happening this week, and there have already been plenty of noteworthy new products that have caught our eye. Here are five newly-unveiled mobile tech items you should know about.

Forget foldable electronics. This year is all about the rollable gadgets. Or it is for LG, anyway — which just unveiled the first rollable phone as part of its CES press conference. Dubbed the LG Rollable, this is the first “rollable” screen phone on the market.

If you’re unfamiliar with the concept of rolling phones, here’s how it works. The screen’s scale is completely customizable. It just rolls right out of the base to expand your viewing and reading space on the screen when you need it. You can also contract the screen to make it a smaller, pocket-sized device for travel. That gives you the option of using this device like a phone or like a tablet depending on the situation.

The other details on the LG Rollable were limited, and LG hasn’t released the price or release date information yet, but it’s pretty intriguing nonetheless.

If you want to watch 3D content on your phone, it could be closer than you’d think. The newly-unveiled IKIN smartphone accessory, inspired by “Star Wars,” can turn content from your phone into 3D holograms.

It isn’t available for retail purchase yet, but the uses are endless. It could be used as a way to explore your smartphone photo gallery in 3D or to immerse yourself in gameplay via an app. You could even use your hand as a controller, which would add some serious power to your phone’s gaming abilities. It’s expected to be released sometime in 2021.

Related: The good, the bad and the weirdest tech revealed during CES 2020

Samsung is adding two new wireless speakers, the compact RA3000 and the RA5000, to its lineup. These new speakers will support 360 Reality Audio, which works much like Apple’s Spatial Audio to create immersive, 3D audio.

What’s unique about these speakers is that they blast sound upward and sideways. This helps give dimension to sound that isn’t available with other speakers since it’s hitting you with both height and width at the same time. In other words, these speakers offer the surround sound you’re looking for, but in a compact package.

Plus, they both have some smart speaker capability, including built-in Chromecast and compatibility with Spotify Connect. They can also be paired with a Google Assistant or Alexa to allow for voice commands.

Lenovo rolled out the ThinkReality A3 lightweight smart glasses, and they’re awesome! They let you create customized augmented realities for work, including 3D project visualization or customized virtual monitors.

The ThinkReality A3 PC Edition tethers with your PC laptop or mobile workstation to let you use augmented realities. You can increase your workflow, visualize projects in 3D or create multiple virtual monitors in your field of view. That allows you to expand your workspace without taking up more space while still using the software tools and applications you need.

They would work great for a builder or architect who wants to visualize a project in 3D or as a great fix for home office space or for offices where space is limited.

Related: Which CES 2020 product was voted most impressive?

Another noteworthy product from CES 2021 is the Eyeware Beam. This product is actually an app for iOS devices that lets you track your eye or head movement while you’re playing a game on your PC. And you won’t need an extra system to pull it off.

Rather than using another device for tracking your eye or head movements, Eyeware Beam uses the front-facing camera system in your iOS device to do the tracking. That’s the same system used for FaceID on your phone.

As the app utilizes the camera, it reports your movements to software running on your PC. This is useful for using special functions in games or getting feedback on how you’re looking at the screen. This app could also be beneficial during reaction video creation by influencers or any other number of uses.

This app is still in beta testing, but it is set to work with any iOS with FaceID when released.