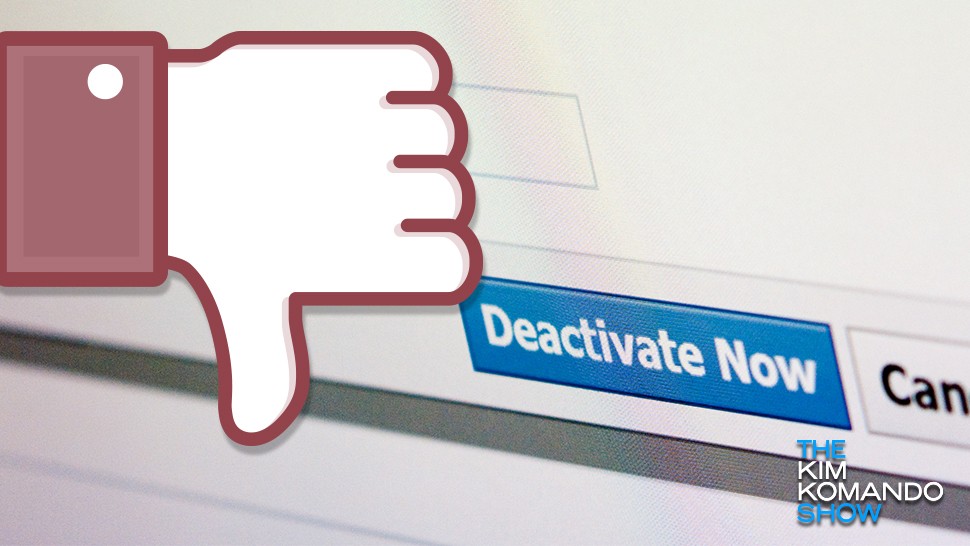 Facebook isn’t going anywhere anytime soon, even though we have enough reasons to dump it: privacy issues, privacy issues and — more privacy issues. Last year was one of the roughest for the social media giant, but at 2.2 billion average monthly users, it doesn’t appear to be losing any ground.

Should you break up with Facebook this year? We’ve got 10 reasons you might want to consider it, followed by a list of things you can do to protect your information if you’re forced to keep or reluctant to give up Facebook.

Before you write to us and tell us that we’re not practicing what we preach because there’s still a Kim Komando Show Facebook page, let us say this: Kim took down her personal Facebook page a while back. We keep the Komando company page because it’s still a great way to find information about digital trends from a trusted source. (At the end of this post, you’ll find some exciting news about a new social network.)

In early 2018, we found out that Facebook app-makers were violating usage agreements — for years — by turning a blind eye and accessing data users’ contacts. Oh, and Facebook knew about it. If you agreed to let this app access your data, you were also unknowingly granting them access to access your contacts’ information.

We felt this one deserved a reason of its own; it’s not just another Facebook privacy issue. The whole deal with Cambridge Analytica was that not only did the company access Facebook user data, but it allegedly used it to influence the outcome of a huge political election.

OK, we admit that maybe we’re harping on this point too much, but, again, our beef isn’t just with Facebook’s privacy issues and what happened with Cambridge Analytica — it’s about the loosey-goosey attitude Facebook had with its API that set us up for these breaches in the first place.

API stands for application program interface, which is kind of like a door that lets software applications talk to each other and share information. It’s not nefarious — it’s how companies like Google and Facebook grow their products; they allow developers to write programs that essentially plug into their products. For example, the company Zynga created Words With Friends, which plugs into Facebook through an API, making Facebook even more valuable to word nerds around the globe.

Facebook has tightened its API policies, which you can read about in an official statement Facebook released in July 2018. Too little too late? We’ll see.

Reason 4: Facebook knows more than you want it to

We talked back in November about theories that Facebook listens to your private conversations and, yes Facebook denies eavesdropping. A handful of media outlets have tested listening conspiracies of Facebook, Google, and others and come up empty handed (New Statesman, CBS News and Gizmodo, to name a few).

OK, so maybe Facebook is not recording your conversations — that would, after all create HUGE data files that would be impossible to store for 2.2 billion users — but it is monitoring what you do on the website (and beyond; see reason 6 below) so it can serve up advertisements that are relevant to you.

Some people find the targeted ads helpful, while others find them downright creepy.

Remember, Facebook is a for-profit business. As much as it likes us to think it’s a community-service-oriented business that connects people and enriches our lives, it is #initforFacebook. Big data = big bucks. Read this post from us if you want to stop Facebook from following you around the web.

How many of us have said, “It’s not real until it’s documented on Facebook.” Relationships, job changes, births, deaths and dog adoptions — you name it. The website is designed to be integral to our lives. Being sensitive to criticism about social media dependency, in 2018 Facebook introduced a tool to help us manage the time we waste/spend on Facebook (and Instagram).

Open the app on your smartphone, select the three-bar menu and select “Your Time on Facebook” to see how much time you’ve spent on the website — on your smartphone. Facebook hasn’t rolled out a time tracker for desktop users.

One guy got fired for urinating on nachos at work and posting it on social media. Another woman who worked at a residential care home lost her job for sharing photos and violating confidentiality of the residents. We’ve all heard the stories, and, OK, Facebook didn’t ruin everyone’s lives; that nacho guy and nursing home worker ruined their own lives by publicly posting content that shouldn’t be.

Still, social media has given new outlets — and expectations — for sharing content to a global audience. If you’re not careful even something as innocent as posting photos from a nursing home singalong can come back to haunt you — and ruin your life.

A group of academics studied the relationship among personality traits, loneliness and Facebook usage and found that — surprise, surprise — people who use Facebook tend to be extroverted and narcissistic. The researchers suggest that extroverted Facebook users tend to express strong feelings of family loneliness, while their introverted non-Facebook-user counterparts tend to experience overall social loneliness.

Maybe Facebook doesn’t create loneliness, but the findings of this study suggest that it isn’t helping.

The brilliance of Facebook is that it, more than Google, Twitter and the MySpaces that came before it, figured out how to create a widespread dependence on the platform.

How many applications have you used Facebook credentials to log into? How many times have you complained about missing an important life event from a friend who shrugged and said, “I posted it on Facebook.”

Academics have been studying social media platforms and testing hypotheses related to them and addiction for years now.

Go through your Facebook list. Ask yourself, If I ran into this person at the grocery store (a) would I recognize them and (b) would I stop and chat? Furthermore, would I (c) invite them to dinner?

Answer “no” to any of the above and we have to wonder, why add them to your social media network? Why see their updates?

The definition of friend has loosened thanks to social media, and it extends to anyone we’ve crossed paths with. Yeah, OK, Facebook lets you give your “friends” statuses so you can somewhat control who shows up in your feeds — you can decide who is a close friend or an acquaintance, and you can decide who you get notifications about.

Clean up your FB past with this free tool, which is a plug-in for the web browsers Chrome, Firefox and Safari. It doesn’t work on your mobile devices. Hint: To manage the FB Purity plugin, look for FBP in the upper right corner of your Facebook page, click it and decide what types of posts you want to see and hide.