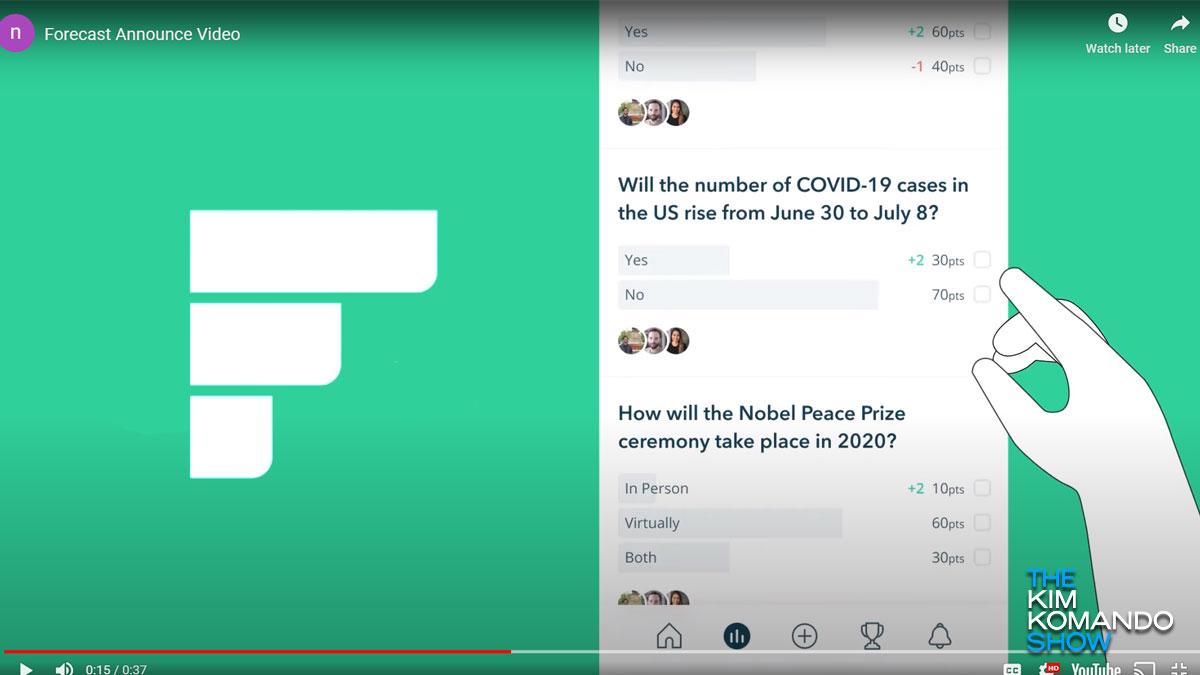 Facebook has been churning out new products at a rate we haven’t seen before. From Zoom competitors to a proposed fiat currency, the world’s largest social network plans on cementing its relevance for some time to come.

It makes sense that Facebook is doing what it can to stay in the game — but whether or not these competing products are worth using is another story altogether. Tap or click here to see what Facebook’s answer to Zoom is like.

Facebook’s newest products aren’t all re-branded versions of existing apps, though. A newly released Facebook platform is actually trying something completely different: crowdsourced predictions of future events. Yes, Facebook wants to know what you think will happen with a variety of subjects ranging from health to politics. But is this actually a smart idea?

Who could have predicted that Facebook would release the Forecast app?

Facebook may be familiar territory for internet users, but the future of the platform will apparently be going in some strange new directions. And “the future” is exactly what Facebook’s new Forecast app concerns itself with — by crowdsourcing theories and speculation about topical subjects and polling users on what they think will happen.

In a blog post on Facebook’s website, the company describes Forecast as “a community for crowdsourced predictions and collective insights.” In other words, its a public forum for speculation about current events. What could possibly go wrong?

Here’s how the app works: Users will be able to submit questions that are approved by a team of moderators. These questions must be theories about upcoming or future events, such as when COVID-19 will peter out in the U.S., or who will win the 2020 election.

Then, once the question is approved, it’s publicly posted for Forecast users to poll themselves on. The result is a clear, concise infographic on public opinion that can be easily digested by media entities, marketers and think-tanks alike.

Once an event has come to pass (or not), the matter is considered “settled,” which means the post in question is archived.

But the most fun part of Forecast comes from its viral shareability. Just like with any other part of Facebook, you can share predictions to other platforms. This can help people who’s predictions came true gain some additional clout on social media.

As fun as Forecast sounds (and let’s be real, it does sound entertaining), there is palpable fear from media analysts about how the platform could be misused to spread disinformation on a massive scale. Tap or click here to see the top 10 fake news stories published to Facebook in 2019.

What could go wrong?

Because the predictions are user submitted, its unlikely that all of them will be backed with any kind of underlying knowledge or experience. For the platform’s launch, all of the predictions submitted are coming from scientists and health officials to keep the topics as focused as possible. But that won’t be the case forever.

There’s also the fact that many people using the platform might not realize this app is mostly a dressed-up opinion polling service. A divisive poll could be shared on social media to put an inaccurate or propagandized spin on certain information.

But beyond the potential for seeding disinformation, as of now, there have been no deep-dives by beta testers or users into the app’s privacy policy. Facebook, above all, is a data broker. With Forecast, it now has multiple sets of extremely reliable polls it can sell to all kinds of organizations like political groups, advertisers and financial speculators.

For now, the app is stable and easy to use, and the predictions are mostly based on informed speculation. Whether this reasonable mode of thinking lasts over time remains to be seen. But based on how a good portion of Facebook is today, we wouldn’t be surprised to see Forecast devolve into ideological screaming-matches and conspiracy theories.

Forecast is now available as a free download for iOS devices. No official date has been set just yet for an Android version of the app, but we’ll be updating this story once we know more.