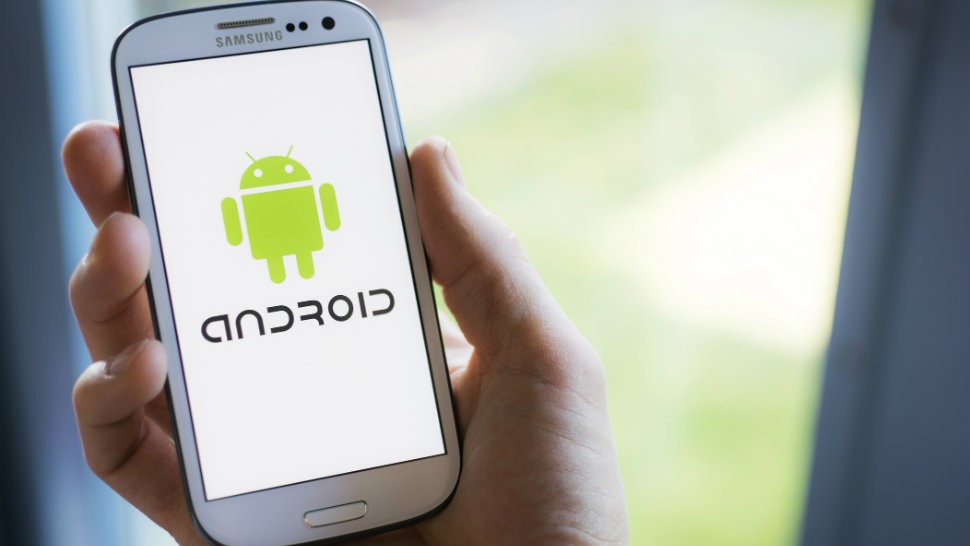 Have you ever had this problem with your Android when you’re out and about? Say you’re trotting down a sidewalk when you happen to pass by a McDonald’s or a Starbucks. You check your phone and lo and behold – your data connection apparently has dropped!

This can be extra frustrating but most of the time it’s not your cellular connection that’s acting funny. Chances are your phone has automatically connected to a free Wi-Fi hotspot (like the ones provided for free by carriers such as AT&T) but it is simply too weak or slow to be of any use.

To prevent this from happening, here are a few tweaks you can try on both Android and iPhone.

Samsung phones have an option called “Smart network switch” that can prevent your device from connecting to poor Wi-Fi networks, however, this setting can also lead to similar issues.

To turn it on or off go to Settings >> Connections >> Wi-Fi >> Advanced>> then turn “Smart network switch” to ON.

Similar to the iPhone, if your Android phone keeps connecting to hotspots at certain areas, you can also try quickly toggling your Android phone’s Wi-Fi radios from off to on again by swiping down from the top of the screen for the Quick Access menu.

Again, I know this will sound like the most obvious advice – If all else fails, just turn your Wi-Fi off.

1. Turn off Auto-Join on the specific network

Introduced in iOS 11, this welcome option can prevent your iPhone from automatically connecting to Wi-Fi networks that have lousy signals.

More importantly, it also allows you to tell your iPhone not to auto-join specific networks, for example, those dreaded AT&T and Xfinity hotspots that seem to be all over the place.

Don’t get me wrong, these hotspots can be useful when you’re in a pinch but I want to decide for myself if I want to use them or not.

To specify this setting for a specific network, do this:

2. Tap the circle with an “i” icon on the Wi-Fi network you want to modify. 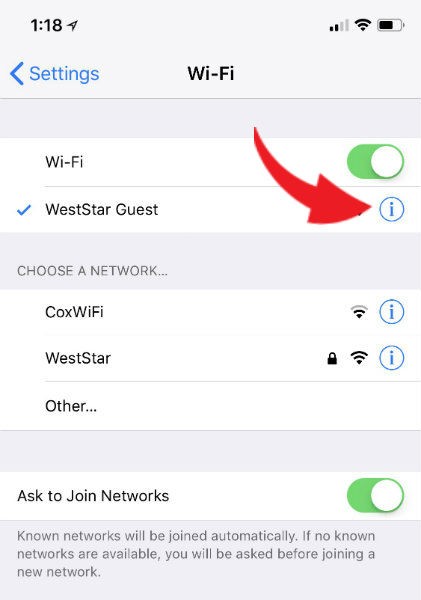 3. Here, toggle Auto-Join to “Off“. Note: This option only shows up when your iPhone has previously joined a network. 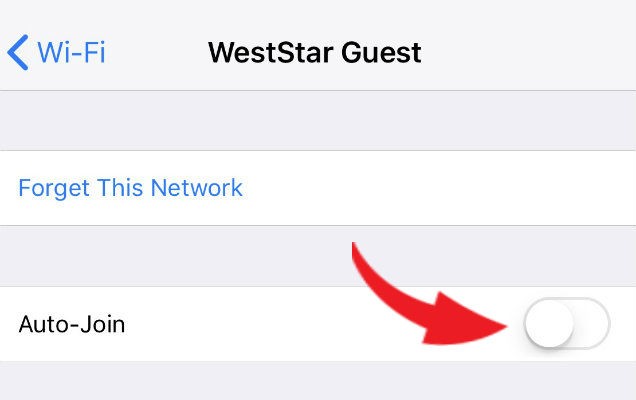 Sometimes even with Auto-Join off, these free Wi-Fi hotspots can still sneak through. Instead of manually turning off Auto-Join for each one you encounter, try this obvious step – turn off your Wi-Fi.

One trick you can try is to quickly toggle your iPhone’s Wi-Fi to Off then immediately back to On again. Most of the time, this is enough to force your iPhone into prioritizing your cellular data connection instead of the poor Wi-Fi network.

You can quickly do this from the Control Panel (swipe down from the top-right on an iPhone X, swipe up from the bottom on other iPhones) then tap the Wi-Fi icon to turn it off (color turns to white).

If your iPhone still keeps connecting to the poor Wi-Fi hotspot, just keep its Wi-Fi off while it is in range. Important: Remember to turn it back on when you’re back in range of your preferred Wi-Fi network!

If you’re traveling and in an area that’s saturated with these Wi-Fi hotspots, here’s a temporary solution you can try –  toggle “Ask to Join Networks” to On.

Having this option set to On will prevent your iPhone from automatically connecting to any new Wi-Fi network and you will be prompted with an alert instead.

Here’s how you turn this on: 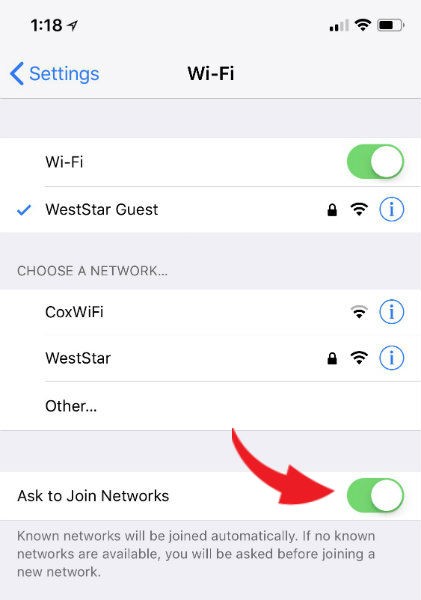 However, the big downside with this approach is that you’ll get a popup each time your iPhone senses that a new Wi-Fi network is in range. This is incredibly annoying when you’re out and about since you will be constantly bombarded with popups from your iPhone.

However, combined with iOS’s Auto-Join tweaks, which automatically clears out the networks with poor connections plus the ones that you specify, these popups can be greatly minimized.

I’d rather have “Ask to Join Networks” set to Off but it’s a viable temporary fix if your cellular data connection keeps dropping at a certain area and you don’t want to keep turning off your Wi-Fi each time.