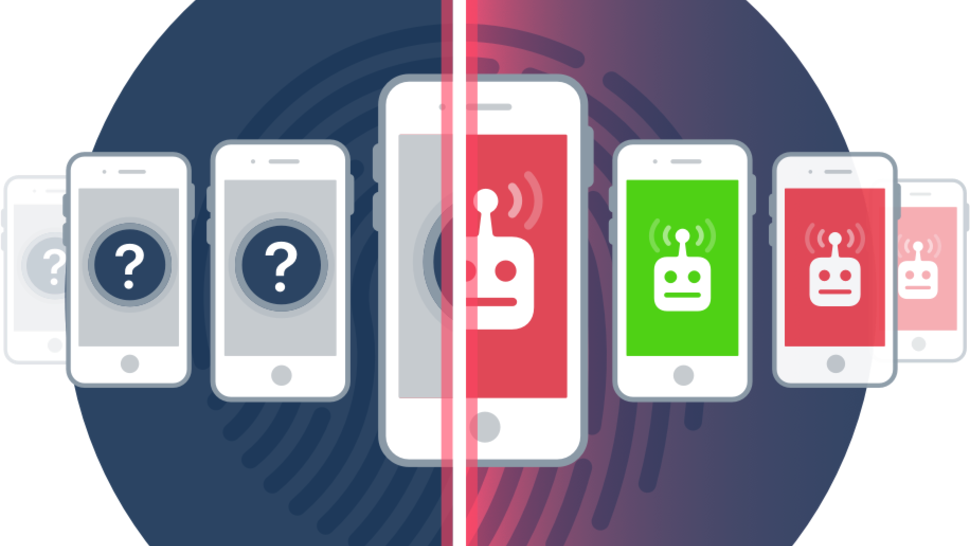 It’s a running punchline here in the editorial room at Komando.com that any time we put “robocall” in a headline, it’s sure to be a top-clicked story. Yeah, we joke about it, but we also know that the fact that our robocall stories generate a lot of online traffic tells us just how much we all hate them.

We told you how cellular carriers are providing customers free or cheap solutions to stop unwanted telemarketing calls. There’s the story that made headlines about the FTC’s shutdown of four major illegal robocalling operations. And we’re always looking for ways that you can stop robocalls on your smart devices.

In this post, we look at one app for robocalls. I tested it on my iPhone for 30 days, and I’m 50-50 on whether I’d recommend it. There were things I liked about it and things I thought could be better. Let’s start with the good.

What we liked about the robocall-blocking app

It offers a 7-day free trial, which was great, but ironically I didn’t get a single robocall in that first week. Seriously — it didn’t do anything the first week. So I sprang for the paid version, opting for the monthly rate of $3.99 a month, because I didn’t want to commit to a whole year ($29.99) without making sure it works. Yes, RoboKiller has lots of positive reviews in the Apple app store, but I’m always skeptical until I try it myself. 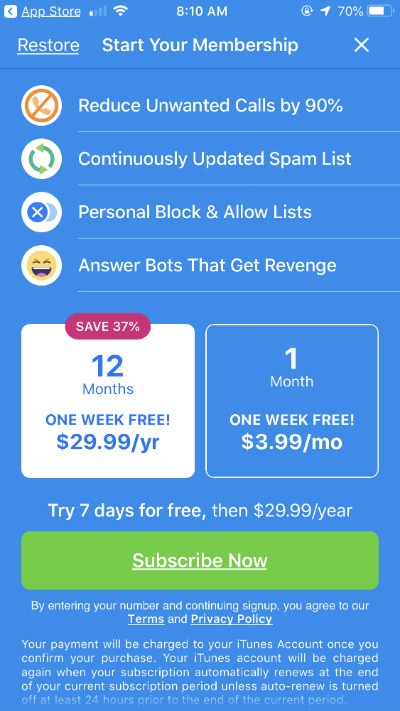 Apps always say they’re easy to set up, and RoboKiller really is. I set this up on my iPhone 7 (I know, I know, it’s almost a dinosaur, but I have yet to find a reason to switch to XS, XS Max or XR.). RoboKiller is available for Android-powered phones through the Google Play store, and setup is just as easy. To enable the call blocking feature, you’ll have to go into your phone’s settings. For iPhones, tap the Settings icon and follow the instructions from RoboKiller to allow the app to intercept calls. Once you’ve allowed your smartphone to work with RoboKiller, you can go in and configure it to work the way you want it. Within the app, tap the settings icon and from there you can:

Important setting in RoboKiller: tap the click/allow icon, then select the allow tab. Make sure you’ve checked “my contacts” here; otherwise, your friends, family and coworkers may get answer bots when they call you — until you mark them safe.

I’ve allowed RoboKiller to send me alerts when it catches spammy calls. In this screenshot below, they caught a health insurance robocall. If it’s a number you recognize or want to unblock, you can click the “allow” button. When you click the “block” option, the app asks for information, so it can update its database of reported calls. This is a little confusing, because if there was no recorded call and you didn’t answer it, you don’t really know. 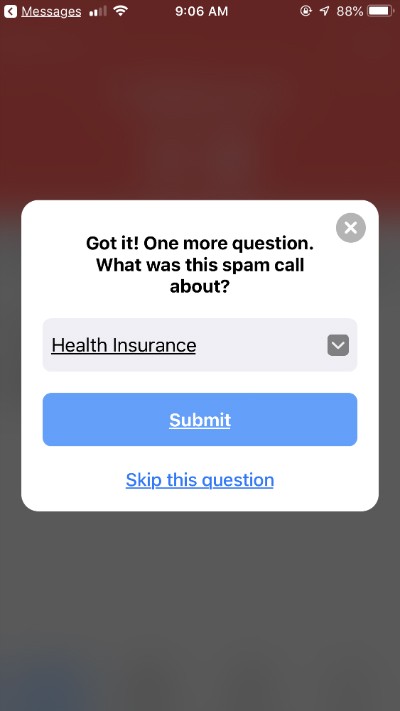 If RoboKiller misses a call and you’ve allowed your phone to report calls to the app (configured in your iPhone’s Settings > Phone > Call Blocking & Identification), you can go into your recent calls, swipe left and report the call to RoboKiller. To view your blocked list, tap the block/allow icon at the bottom of the screen and select the block tab. It will look something like this: 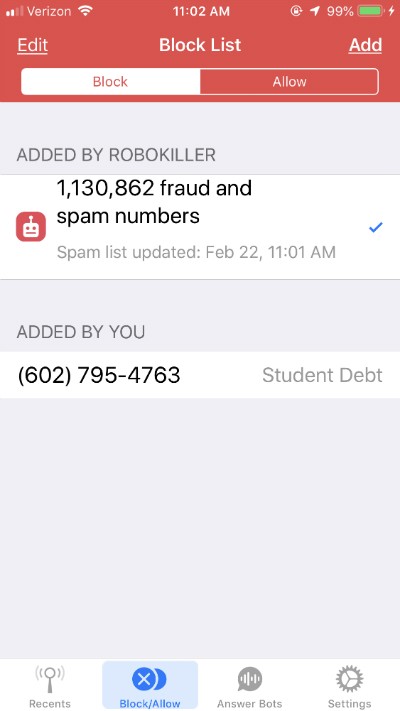 Monitor your activity from the home screen. The “recents” icon on the home screen will take you to all the calls RoboKiller has intercepted, blocked and recorded. Below you’ll see three calls that RoboKiller logged. The first one was blocked, and the second and third were calls I missed. Call on March 4 at 5:37 p.m. was a junk call, but the call at 10:44 a.m. that same day was my dentist. I swiped left and told RoboKiller to allow them through. 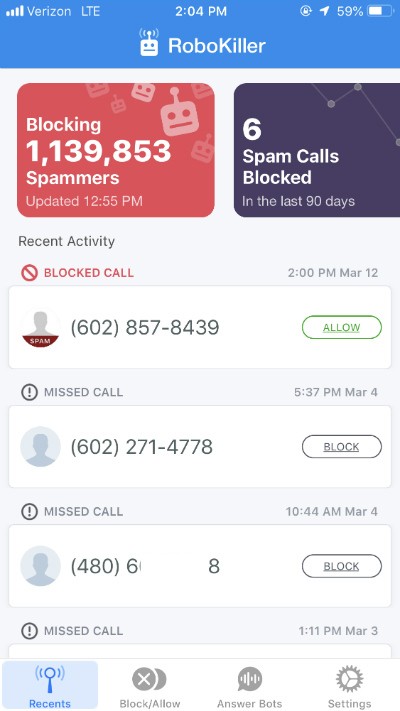 Answer bots made us laugh

Answer bots are outbound recordings that answer the phone for you. The best way to explain them is to share with you a couple snippets from telemarketers that RoboKiller intercepted on my phone. You can create your own answer bot, or you can use the many answer bots that come with the app. I opted for the “Random” answer bot. You can choose from answer bots with titles like “Morgan Freeman impersonator,” “Spoiled Child,” “Nonsense,” and one called “Default Answer Bot,” which lets callers know their call has been answered by an app and it’s been blocked. 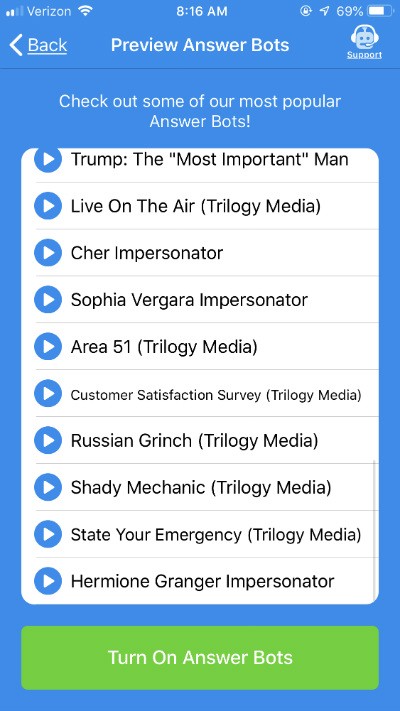 This poor guy gets punked by my bot

In this audio below you’ll hear a guy from MPT Research trying to get a few minutes of my time to answer survey questions. The other voice on the line is the answer bot. Yeah, I feel kinda bad because, admittedly, Timothy was just trying to do his job. But to be fair, so was I, and I’m tired of getting these health insurance calls. I’d rather waste 1:22 of Timothy’s time than mine.

Have you seen incoming calls from phone numbers similar to yours? That’s a psychological trick telemarketers use to try to trick you. They figure if you think the number looks familiar, you’ll be more likely to answer the call. RoboKiller has a feature called “Neighbor Spoof Blocking,” which watches for phone numbers that are similar to yours.

As more people use and report calls, the information gets better. I was happy to see that it blocked donation request calls from my university; not that I don’t want to donate, but they call all the time.

The app shows you how many calls it’s blocked for you in the last 90 days. Since I’ve had it installed for less than 30 days, my blocked-call count is only 17. Seems low, but I guess that’s me being glass-half-empty. Seventeen blocked calls is, well, 17 calls I didn’t have to answer.

RoboKiller worked on about 50% of the robocalls I got. It’s not a 100% effective at stopping robocalls, but it did cut down on the number of them. I’d argue that their marketing claim, “The app that stops spam calls forever” is a bit misleading. I mean, I guess 10, 20, 50 years from now, if we’ve flagged enough phone numbers in their database, we could stop these calls forever.

As far as the answer bot function goes, it worked only twice in the month I used it. I was disappointed. I hoped to have a slew of recordings to share with you, but I had only two halfway decent ones. I’d like to see an option when I see an unidentified number to be able to send them to an answer bot.

Bottom line: Would I recommend RoboKiller? I sprung for the one-year plan. For me, the reduction in calls was worth the 30 bucks. I worry though that as the app intercepts those calls on my behalf, that sends some sort of signal to the robocallers that I’ll answer. Will it cut down on my calls or increase them?