We’ve been telling you a lot about Windows 10 since it debuted two years ago. We’ve told you about the recent Creators Update release.

We have told you how to save loads of money by accessing a brand-new version of Windows 10. Read about Windows 10 S here.

But, psst! We’ve got a secret Windows 10 trick that many of its most avid fans don’t know about.

Do you love shortcuts? How about secrets?

Well, Windows 10 has both. This shortcut will give you access to a slew of tools that you’ll use every day.

The best part is it will save you a lot of time. With just one click, you can access Windows 10 tools like File Explorer, Shut Down, Task Manager and more.

Instead of clicking here and there and there, to access these features, you just click once or twice. We’ll tell you two shortcuts to access Windows 10’s most valuable features. Plus, keep reading for a bonus third shortcut that almost no one else knows about!

Tip in a Tip: Windows 10 secrets only the pros know

You click on the Windows 10 start button all the time. It’s the little Windows icon in the lower-left corner of your computer screen.

Have you ever right-clicked on the start button? If not, that one simple click is a super-simple shortcut to many of the files, documents, photos and apps that you normally spend a couple of minutes trying to find.

Here’s Why You’ll Use the Windows 10 Secret Shortcut

Windows 10 is great for many reasons. It’s secure and fast, just to name two.

Another reason is that Microsoft worked hard to make Windows 10 easier to use than previous versions. Unfortunately, you still end up spending a lot of time trying to find many of Windows 10’s most popular features. Just try this.

If your computer is slow, how do you find out what’s slowing it down? One way is to look at the Task Manager to see what’s running. But how do you get there?

One way is to type “task manager” in the taskbar menu. That takes you to a link for Task Manager. Click on that link and in about a minute you’ll see what’s running.

Instead, with this shortcut, you right-click the Start button >> click on Task Manager. That’s it. You’ve saved time and you avoided the headache of searching through folders and files for what you’re looking for.

Do you ever uninstall programs? If so, you know how often you forget how to do that.

The secret Start window has quick access to many other functions, like Network Connections, Disk Management, Shut Down and more. 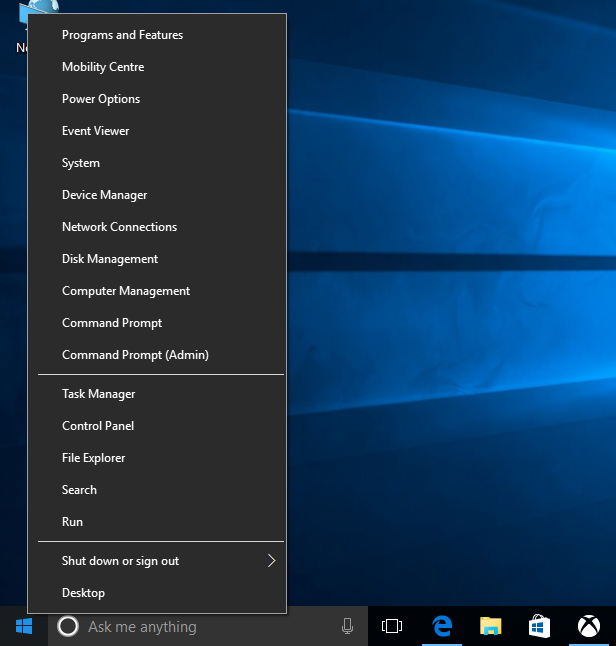 Another way to access the secret Windows 10 start button is to hold down the Windows key (that’s the key on your keyboard that looks like a window, usually to the left of the space bar). At the same time, hold down the X key.

Have you ever noticed that Windows and other tech companies, like Apple, aren’t great about keeping secrets? For instance, images of the next version of the iPhone are always leaked months in advance.

That’s because they’re not really secrets. Apple wants iPhone fans to get excited about the next-greatest iPhone.

Microsoft is the same way. With Windows 10 Creators Update, for instance, there were leaks about cool new features for months before it was released.

However, sometimes, tech companies aren’t keeping a secret as much as they’re just not sharing it with everyone. They may release some functions to power users, who develop apps for Windows 10, for example. If you’re using Windows 10 all day, every day, Microsoft will create shortcuts and share them with you.

That’s most likely the case with the secret Windows 10 start button. Now that you know about it, use it.

We encourage you to play around with Windows 10’s secret Start menu. Let us know in the Comments how you’re using it.

Do you use a touchscreen laptop or tablet? If so, to access Windows 10’s secret start menu, just touch the Start button. Hold it down. Wait until the secret menu pops up.

3 huge Windows 10 annoyances (and how to fix them)