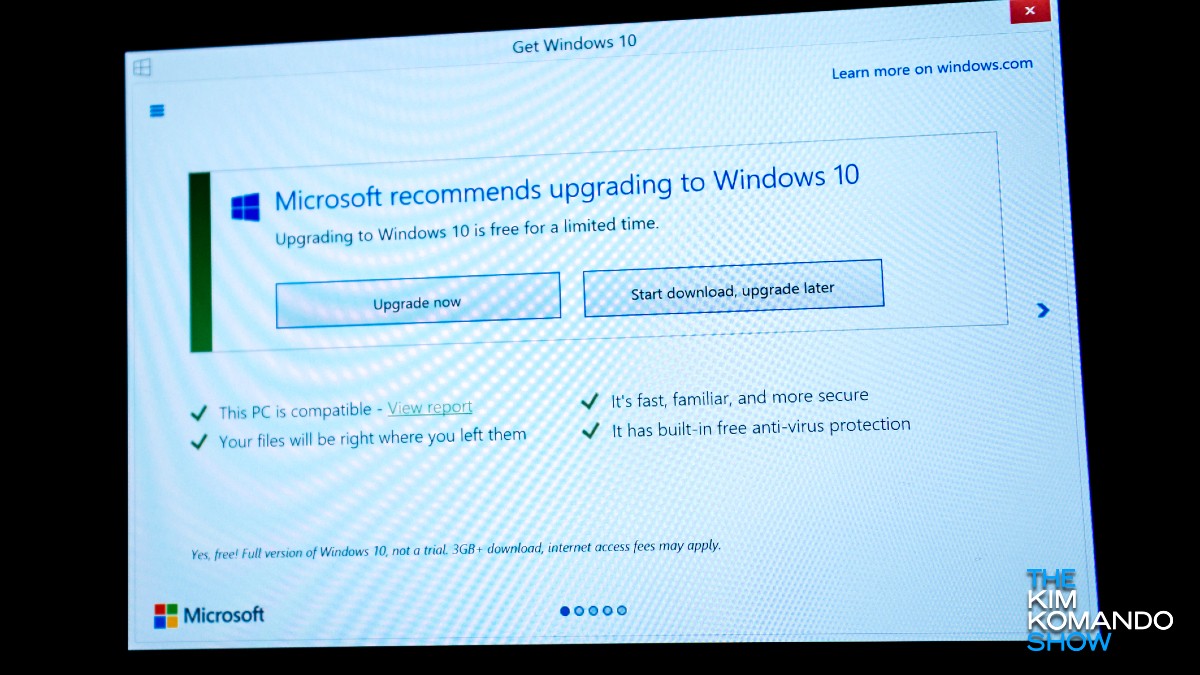 In the world of computers, nothing lasts forever. Products that seemed like cutting-edge technology one day are obsolete the next. The same can be said for software, which sometimes outlasts the hardware it comes with.

A perfect example can be seen in Windows 7. This operating system is one of the most widely used in the history of computers. But as time passed, it became less secure as hackers improved their tactics. Tap or click to learn more about a critical emergency patch released for Windows 7 in the past year.

And now, after more than a decade of service, Microsoft is finally pulling the plug on Windows 7. Citing security issues, Microsoft is pushing alerts urging stubborn users to upgrade their systems as soon as possible. Here’s why you might want to take these alerts seriously.

Over the past year, Microsoft has been warning users about Windows 7’s impending conclusion on Jan. 15, 2020. Though the operating system will still work on the PCs it’s currently installed on, Microsoft will no longer offer support for the software.

Microsoft plans to roll out annoying full-screen alerts to Windows users who refuse to upgrade after Jan. 14. Apparently, this is meant to underscore the urgent danger Windows 7 loyalists face if they refuse to move forward.

These alerts will be included as part of the final Windows 7 security patch, which went out to users Dec. 10. Following this patch, no additional free security updates will be available for Windows 7.

What happens if I stick with Windows 7? Why do they want me to upgrade so badly?

In a nutshell, it’s all about security.

Windows 7 has been around long enough for hackers to poke numerous holes through it. It’s far more vulnerable than a new piece of software hackers are less familiar with, and anyone who doesn’t upgrade is at a higher risk for a host of malware and cyberattacks than users who can receive the latest updates.

And truth be told, Windows 7 is much more dangerous to use than it used to be. A large amount of malicious software exists specifically to target Windows 7 users, and several security flaws have been found in software like Internet Explorer.

The United States government is also urging users to upgrade in an attempt to mitigate large-scale cyberattacks. Tap or click here to see why the NSA wants Windows users to get caught up on updates.

How can I upgrade my PC?

Thankfully, upgrading to Windows 10 is easy — but it isn’t free. A new single-license download for Windows 10 Home edition will run you $139, and it will take several hours of update time before you can jump back on your PC again.

Nonetheless, upgrading will make you current with the most secure, recently patched version of Windows. This will protect you against the most common types of malware and will make your computer more compatible with new software that may not have worked on your PC before.

Luckily, Microsoft did offer the ability to upgrade free a few years ago, and the method remains active today. Tap or click here for instructions on upgrading to Windows 10 for free.

But be aware: There are still numerous bugs on Windows 10, and updating can sometimes put new ones on your system. Your security is still worth the trouble, but don’t be surprised if you have some compatibility issues when you first get started. Tap or click to see how a Windows 10 update broke printer functions for thousands.

If you run into trouble, Windows 10 does allow you roll back to previous patches — but not previous versions, like Windows 7. Alas, nothing lasts forever.