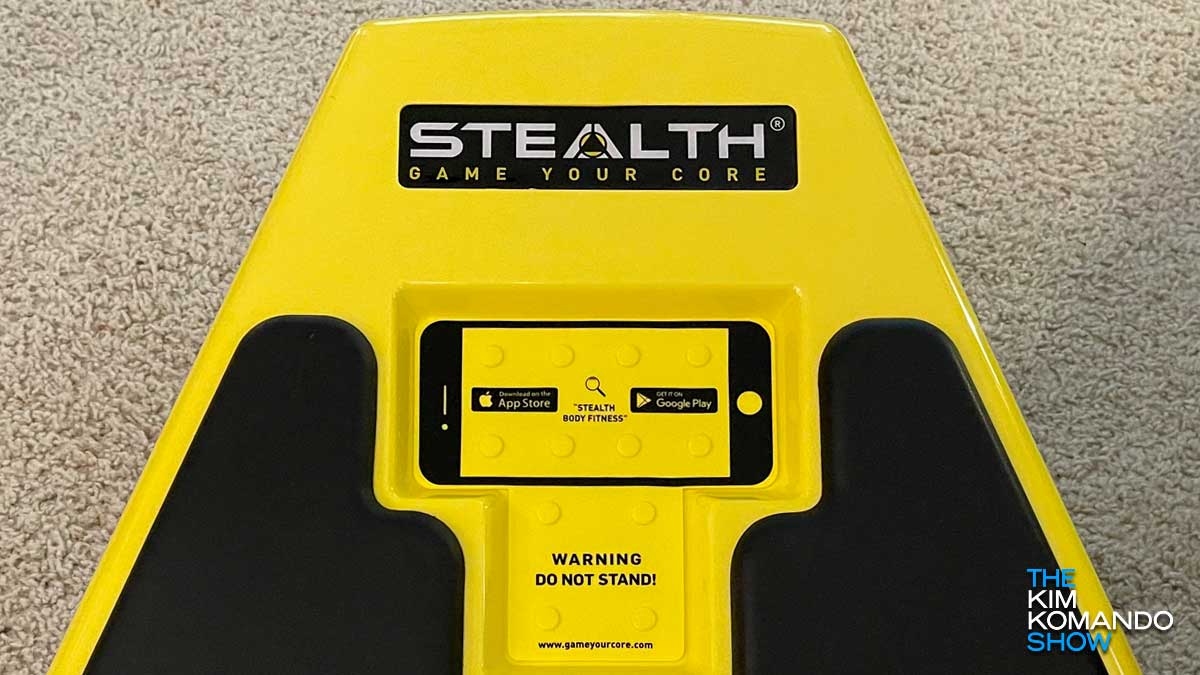 Working from home over the past year, I’ve tried to put a bigger focus on my overall fitness level. Even with nowhere to really go, the motivation still isn’t always there to just go workout.

Still, months ago, I bought a compact under-desk elliptical from Cubii that I could use while working or watching TV. It’s been a success story because I’ve used it every day since late last September.

While the Cubii Pro has been great for the legs and cardio, it leaves out other body parts that also need a little work. That’s where the Stealth Core Trainer comes in, which is supposed to provide a full core workout while you play games on your phone. But is it worth it?

The joys of planking

First, let’s talk about planking. That’s where you get down on the floor facing the ground, stretch out your legs and hold yourself up using your forearms. Maintain a good form, and it’ll work your core (like abs) and other muscles throughout your body.

If I were to ask a group of people if they liked planking, I don’t imagine I would see too many hands go up. It’s no fun staring at the ground while trying to hold your body in one motion for a seemingly endless amount of time.

The Stealth Core Trainer is made for planking, but with the added twist of trying to keep your balance. No wonder games are involved in distracting you.

With no context, it’s pretty hard to figure out what the heck this triangular-shaped hunk of yellow plastic is supposed to be. But that’s supposed to be the simplicity of the Stealth Core Trainer, with a relatively small form factor that means you can tuck it away when you’re not using it.

It’s basically a platform on a multi-directional base, with a notch for your smartphone. When planking with the Stealth, you move front to back, side to side, playing games through the companion app such as Speed Gliding and Space Escape.

Seems easy enough, right? Considering the Stealth targets 29 muscles across your body, not so much. But whoever said strengthening your core was supposed to be simple?

Got 5 minutes? Watch Kim discuss the Stealth Core Trainer with her team of experts

My experience using the ‘Plankster’

The day this sample unit was delivered, I opened the well-packed box and removed the Stealth. It’s a little bigger than it looks in the photos but very lightweight because there’s just not much to it. Then I downloaded the app and set up an account.

I set the platform in the middle of my carpeted den, set my iPhone down in the designated spot and assumed the planking position. I clumsily moved my forearms onto the black pads built into the Stealth’s top and pushed forward to lift it into the balanced position. I’m glad no one was watching my first attempt.

I’m not a beginner to regular planking on solid ground, but it’s been a few years. Doing it while trying to balance was a little much, and down the platform went on the right side. It’s not like falling off, just a question of awkwardly starting it over.

Once you’re ready to go, you pick which game you want to play and choose from Countdown or Endurance modes, with the latter being about how long you can go before losing all feeling. My record is not good, but I will say Speed Glider is actually pretty fun as you control a virtual glider to collect points while avoiding obstacles.

Is the Stealth Core Trainer worth it?

I’ve used the Stealth off and on for a few weeks now, but it still hasn’t lit that spark that planking is fun if mobile games are involved. That’s not to say I’ve given up on it. It just wasn’t as easy to adopt as an elliptical under your desk that makes you forget you’re even pedaling.

If this is something that might interest you, there are some considerations to take into account. For one, it’s challenging even for people in decent shape. While the Stealth aims to work your core and strengthen various muscles, you could hurt yourself if you don’t use proper form.

If it’s too hard to plank with your legs straight, put down your knees. It won’t be as much of a workout, but it also won’t be as much of a struggle. And make sure to use it on a soft mat or carpeted floor — not a hard surface. Trust me, you don’t want to get your fingers caught between the Stealth and a hard place.

Then there’s the price. On Amazon, the Stealth Core Trainer costs $149, which seems like a lot for the low-tech platform that it is. That’s where the app comes in.

The app is free to download with four games to play and useful ways to track your stats, challenges and leaderboards. So when you think of it that way, it’s the app that can justify at least some of the cost of the Stealth. You can also opt to unlock more games and premium content through Stealth Premium, which costs $24.99 per year following a 7-day free trial.

Don’t spend $100 or more on something that’s just going to end up collecting dust in a corner. That can be said for anything. And if you really don’t like planking, this might not change your mind.

On the other hand, if this is something you can see yourself spending a few minutes on per day, it can potentially help. While the games can get a little repetitive, they do a nice job of distracting from what’s otherwise a very dull routine.