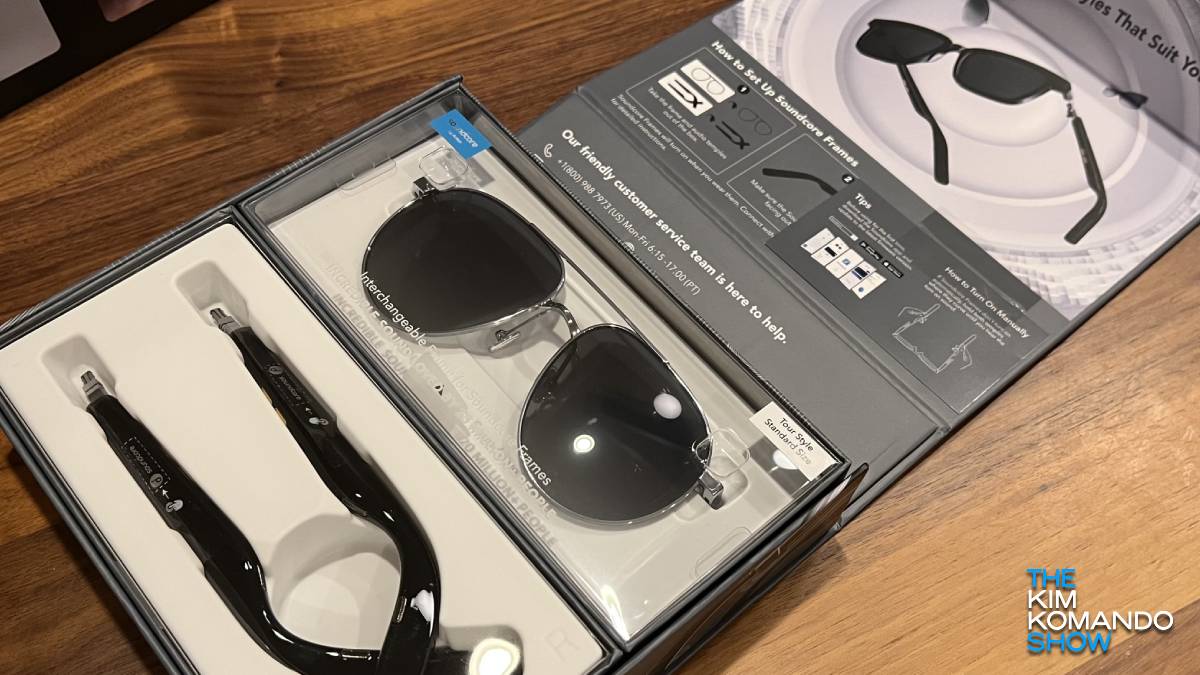 Remember Google Glass? This, let’s say unique, introduction to smart eyewear was supposed to change the tech world as we knew it. And when it was finally made available to the masses in 2014, it certainly made headlines … but not in the way Google had hoped.

Privacy concerns and plenty of jokes kept Google Glass from going mainstream and potentially slowed the acceptance of this kind of smart wearable. Yet, companies have continued developing smart glasses, including Snap, Amazon and Facebook.

While many come equipped with augmented reality tech, cameras and other potentially invasive features, other smart glasses from Bose and Razer are just made for convenience, like listening to music. Now there’s another option from Anker Soundcore, and these are built in a way that doesn’t limit your choice of styles — but are they worth the price?

The Soundcore Frames are audio glasses designed for immersive sound, just released in November. Below are the notable specs, but stick around because I’m saving the best part for last.

The standout feature for these glasses is the quick-release hinges so you can mix and match different styles of detachable frames. That means you don’t have to buy a whole new pair of smart glasses anytime you want a different look.

After you purchase the $199.99 kit that includes the audio temples and frames of your choice, you can later buy additional frame styles for $49.99. There are currently 10 frame styles to choose from, many of which are pictured below.

Anker sent me a kit of Soundcore Frames to review along with a number of styles. The frames I received included Festival, Harbor, Landmark (in three different colors), Marina, Promenade, Tour and Wander. That’s a total of nine frames, with the exception of one called Cafe.

The main kit included the Tour frames, which resemble typical aviator sunglasses. Also included was a USB-A charging cable (no wall adapter) and a collapsible glasses case that I’m not totally sure adds a lot of protection.

Then connect the hardware by pushing the audio temples onto the frame hinges. Just make sure the Soundcore logo is facing outward on each temple piece. Check out a closer look at the temple connector below.

I then connected the temples to the supplied charging cable. As you can see, the glasses need to be folded in order to charge. Otherwise, the two contacts won’t be able to reach.

According to the included Quick Start Guide, the Soundcore Frames should power up and enter Bluetooth pairing mode as soon as you put them on, with a voice assistant to prompt you through the rest of the setup. Alas, mine did not power on automatically.

If that happens, you’re supposed to hold both temples where they curve around your ears until you hear a sound. It took a minute to find the sweet spot, but I eventually got the glasses powered on. I connected them via Bluetooth and finished setting them up through the app.

Different settings to choose from

Once connected, I was pleasantly surprised at the number of settings to choose from for a more customized experience. You can pick from equalizer presets such as Soundcore Signature, Acoustic, Dance, Podcast and Classical. The Signature setting sounded best to me when listening to music, but you also have the option to create your own custom EQ.

There’s also a feature called OpenSurround that’s supposed to give a more concert-like experience. You can choose from seven levels, which are then applied to whichever EQ setting you’re also using.

Swiping from back to front on the left temple will skip to the next track while going the opposite direction will play the previous one. On the right temple, I can swipe either direction to adjust the volume.

There’s also a setting that enables voice control without using any kind of wake word for commands like skipping tracks and answering calls.

Next, it’s time to open Apple Music and my favorite playlist of 90s alternative rock. I cycled through various tracks from bands like Green Day and Pearl Jam, covering everything from loud electric guitars to drums to acoustic solos.

The sound quality was better than I expected for something that doesn’t cover or otherwise go in your ears. The music was clear based on the EQ settings I chose but was still lacking in areas like bass with OpenSurround enabled.

I cycled through OpenSurround levels during a track, with the lowest level making the audio more vocal-dominant and level seven putting a bigger emphasis on the instruments — too much emphasis. Regardless, every song I listened to still sounded better with OpenSurround enabled than without.

The biggest consideration here is that these aren’t headphones or wireless earbuds with active noise cancellation. These are glasses with two speakers on each temple (one in front of the ear and one behind to achieve better stereo sound), and you can still hear much of what’s happening around you at a moderate volume level.

With the volume turned up to about 50%, I could still hear doors closing or one of my dogs barking in the backyard. That brings me to my next point: You can hear sounds around you, and others will be able to hear what you’re listening to.

There’s an option for Privacy Mode in the settings designed to reduce the amount of sound leakage, and it works to a certain degree, especially if you’re outside. But if you’re in a very quiet room with someone sitting up to six feet away, they’ll still be able to hear what’s coming through the tiny speakers, whether it’s music or the person on the other side of a phone call.

Specs with some unique specs

Back to the physical frames, I tried on each variation Anker sent. From a fashion standpoint, my favorites were the Landmark and Wander styles, which both resemble classic Ray-Ban Wayfarers.

The Wander frames are just a little wider than the Landmark version. I also liked the look of the Harbor frames, but the aviator-inspired Tour Style was a little too “Top Gun” for my taste.

The only tedious part involves switching frames. Each temple piece is a tight fit into the frame, and it takes a little force to remove them — all the while you think you’re about to break them.

That aside, none of the frames were uncomfortable and the speaker-packed temples never felt too heavy. For the most part, they felt like wearing average sunglasses, even outside. The dark, polarized lenses are a nice touch and work well.

Verdict: Are the Anker Soundcore Frames worth it?

While it’s nice to have the convenience of two everyday products combined into one thing, the Soundcore Frames (and other similar audio glasses) probably won’t truly achieve a mainstream reach. These are created for people looking for something specific — who don’t want to leave the house every day carrying a pair of sunglasses and earbuds.

For those looking for a solution like that, the Soundcore Frames hit the mark aside from sound leakage you wouldn’t experience using headphones or earbuds. The sound quality is also generally good, but again could be a step down from what you’re already used to.

The battery life is shorter than some competitor products like the Bose Frames, but 5.5 hours still isn’t bad. But the standout feature is the ability to spend only $50 on a new set of frames when you feel like going for a different look. Check out the Soundcore Frames with the Wander Style.