What do thieves, a drunk squirrel, cantankerous neighbors, and Kim Komando have in common? Think it’s this week’s podcast? Wrong. Although, the combination would make for an outrageous, and, no doubt entertaining show, they are more likely to show up on the Twitter feed, BestOfNextdoor.

Grab some popcorn and let me explain. Neighborhoods around the globe have created watch groups in which residents are tasked with observing the goings-on in their local area, all with the premise of keeping their community safe. Noble in nature, this concept has taken to the internet in a broadened form with the Nextdoor site (and app).

What initially began as social networking for neighborhoods back in 2011, has since catapulted beyond a convenient way to connect with one’s neighbors. These days you will have no trouble finding stories about people complaining to their Nextdoor group regarding a litany of issues; from the height of one’s grass to parked vehicles that are not worthy of the neighborhood.

The Twitter handle BestOfNextdoor shares these complaints along with a bit of lighter fare, complete with photos and videos taken from the Nextdoor app (available on the Google Play Store and Apple’s App Store). Although not affiliated with Nextdoor, the BestOfNextdoor Twitter feed is chockful of over-the-top Nextdoor experiences.

In addition to videos revealing homeowners’ attempts at thwarting would-be thieves by setting up packages filled with random, useless items on their porches, community residents post sightings of unanticipated visitors to their yards, including peacocks and pigs, while others share amusing videos focused on common animals behaving oddly as seen in a popular drunk squirrel video.

Scattered amongst the humorous posts are ramblings of the grouchy homeowner who can’t help but berate others over the pettiest of things. One such malcontent chose to pick on the owner of an “older model car parked on the street,” complaining the vehicle was of such low Kelley Blue Book value, it was not worthy of being parked in the neighborhood.

The poster continues bemoaning how outrageous it was the residents were subjected to having to look at the car. Seriously?

Another resident did not mince words when ranting how certain neighbors are neglectful in their lawn care, causing other homeowners concern over the potential loss of home value in the very “respectable subdivision.” The tweeter suggests those who cannot keep up with their lawns “go live in the sticks.”

“Go live in the sticks”

“Go live in the sticks”
An all timer @bestofnextdoor for 3 weeds pic.twitter.com/CfBl3Kerv3

Recently, our wonderful Kim Komando averted making her presence known in the Nextdoor annals. During her morning commute to work, Kim received a pop-up alert from the Nextdoor app on her phone.

Using Apple Car Play, Kim had Siri read the message aloud, “woman speeding through the neighborhood.” Since Kim coincidentally left at that same moment, she thought for sure it was her!

Kim pulled over to read the message on her phone. One peek at the alert, and Kim realized it wasn’t — it was one of her neighbors outing another neighbor with a photo of the offender’s vehicle and an angry post for speeding through their neighborhood. Although others have not been so fortunate, Kim avoided the embarrassment of being broadcast as a menace on Nextdoor.

“Not the time or place to peddle your oils, Joshua…” 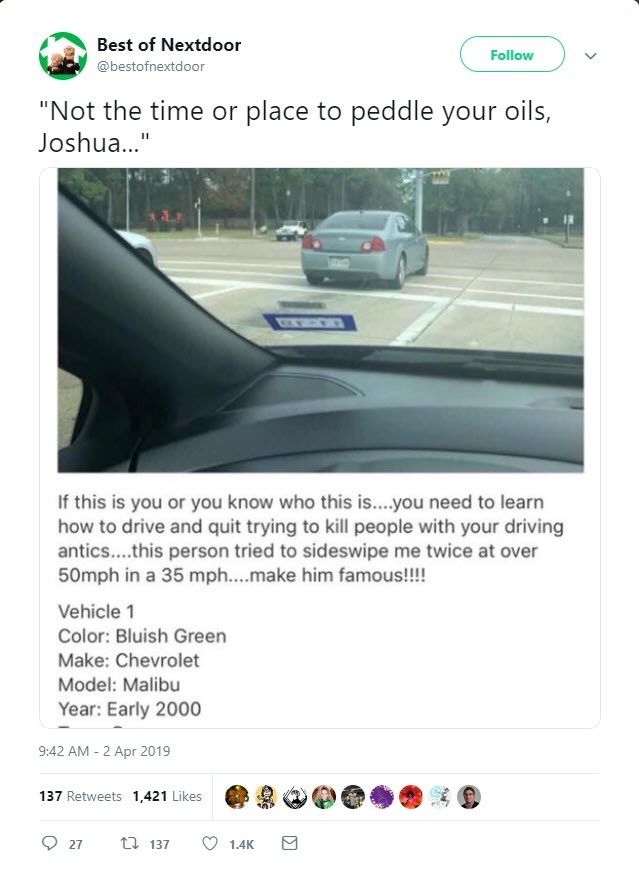 In addition to the potential for being “called out” on Nextdoor. Many have privacy concerns about sharing information with neighbors. Tap or click here to see what Kim has to say about this issue.

While technology brings us closer to others around the globe, it is nonetheless what makes strangers to those around us. Although there is a notable purpose for Nextdoor — the uniting of neighbors, it is often littered with posts from people who would rather dis, debate and disparage community members online than create face-to-face relationships and address any issues with them discretely.

What’s the lesson here? Don’t speed through your neighborhood or steal packages off nearby porches and avoid serving squirrels alcohol. Also, don’t sweat the small stuff and be kind to your neighbors because you never know who’s watching.