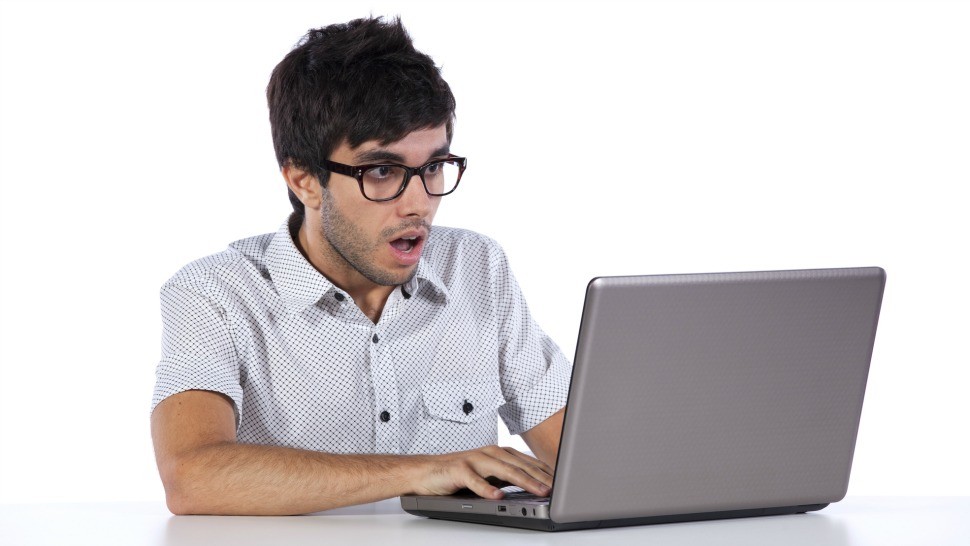 The spreading of “fake news” has been out of control for quite some time now. There was so much misinformation showing up on Facebook and Google, both sites had to make some policy changes.

To try and help end the madness, at the end of 2016, both companies started cracking down on sites promoting fake news. Meaning, they will shut down fake news sites that are using the companies’ ad services.

Despite those efforts, the fake news epidemic hasn’t gone away.

People aren’t just being misled for entertainment purposes either. There have also been numerous scams and victims coming from this fake news phenomenon.

That’s why you need to know how to distinguish between real and fake tech news.

Like-farming scams have been popping up all over social media lately. These scams are exactly what they sound like, an attempt to get as many “likes” or shares on sites like Facebook. The person behind the scam typically uses stories that will tug at your heartstrings.

The more likes and shares a story receives, the more likely it is to show up on other users’ News Feeds. This gives the scammer more viewers for posts that can trick people out of personal information or send them to malicious sites.

The story that is originally posted normally has nothing dangerous about it. Only after the post gets a certain number of likes and shares does the scammer edit it and add something malicious.

A recent example of a like-farming post was about a young boy who was allegedly suffering from seizures. The post on social media claimed that the child had been airlifted to a hospital and asked users to share the post and pray for the boy.

The problem is, there is no proof that the child ever existed. Researchers tried tracking the boy and his family down to follow up on the story and found no records that could verify the situation.

It turned out that pictures of the child circulating on social media had been stolen from someone else’s account. The scammer used the stolen photo to create the fake post.

This is a common example of a like-farming scam. Click here to see yet another example and learn how to avoid them.

As we said earlier, it’s not just fake news stories that you need to watch out for. Scammers are also creating fake promotional ads as well.

You will see many of these fake ads on your Facebook News Feed. They are basically phishing attacks where the criminal attempts to steal users’ personal information.

A recent example is a coupon circulating on Facebook for Dunkin’ Donuts. The company was supposedly celebrating its 50th anniversary by giving away one free box of donuts to everyone with a special coupon.

All you needed to do was click on the digital coupon and you’d be taken to what looks like the official Dunkin’ Donuts website. There, you would enter personal data to activate the coupon. In some cases, the site was set up to let you apply for a credit card.

The problem is, the page you’re taken to after clicking the digital coupon is fraudulent. Anyone who applies for the credit card or enters their personal data is actually giving it to the criminal behind the scam.

Here is an example of the fraudulent ad: 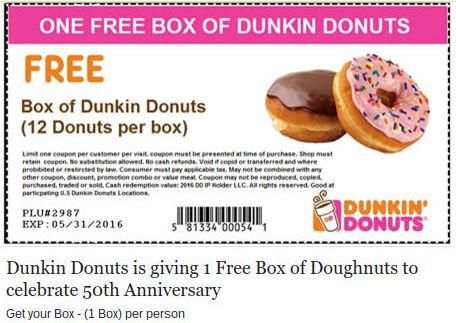 This isn’t the first fake Dunkin’ Donuts offer making the rounds on social media. In 2012 there was a similar scam that offered everyone who clicked on the ad a free $100 gift card.

It’s not just donuts enticing victims into clicking malicious links either. We recently told you about an attack where scammers were supposedly giving away $50 toward your next purchase at Lowe’s.

Now, scammers are tricking Facebook users with a fake $75 Bed Bath & Beyond coupon. This attack works just like the Dunkin’ Donuts scam with a twist. Before getting access to the coupon, users are required to forward the post to their friends, opening the door to more potential victims. 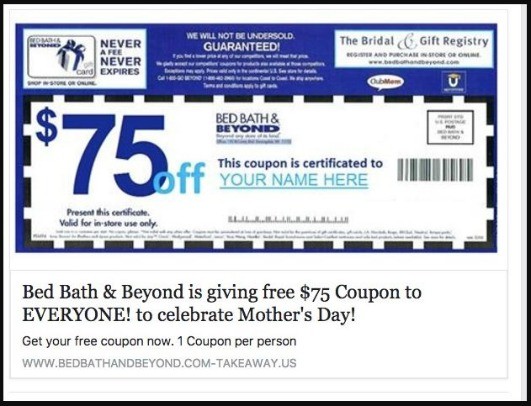 Once the user clicks on the digital Bed Bath & Beyond coupon, they are taken to a fraudulent site that looks official. There, they are told to complete a survey to activate the coupon. Unfortunately, the coupon does not exist and the victim is just handing over their personal data.

There are ways to stay protected from phishing attacks. Be cautious with links, watch for typos, use multi-level authentication and have strong security software on your gadget to name a few. You should also familiarize yourself with what a phishing scam looks like. Click here to take our phishing IQ test to see if you can recognize one.

The Better Business Bureau (BBB) has given these suggestions to avoid social media scams:

There is a product available that lets users turn a non-smart TV into a smart TV. It’s called the TV Frog.

Now, the TV Frog appears to be a real product. It connects to your non-smart TV with an HDMI cable and has streaming apps like Netflix, Hulu and YouTube.

It’s being marketed as a replacement for cable or satellite for a one-time fee, which really got potential customers excited. The problem is this is NOT true!

Although the device does allow you to stream services like Hulu and Netflix, you still have to pay their monthly fees. So to call Frog TV a replacement to your monthly cable bill for a one-time fee is misleading. This falls under the category of, “if it’s too good to be true, it probably is.”

There is a good chance that you have received a warning from one of your friends on social media in the past. My News Feed is peppered with warnings of viruses and scams constantly.

Unfortunately, there are fake warnings mixed in with real ones all the time. A recent example deals with the video “Sonia Disowns Rahul.”

People on social media are seeing warnings that they should not accept this video because it contains a malicious virus. These messages started circulating last year and are still going around today.

The warning post says, “Tell all contacts from your list not to accept a video called the Sonia Disowns Rahul. It is a virus that formats your mobile. Beware it is very dangerous. They announced it today on the radio.”

This is not true. There is no radio station in the country warning listeners of this video. The message is a hoax.

Who knows why someone would start circulating such a rumor. Maybe they’re looking for 15 minutes of fame. Maybe it’s another like-farming scam like we mentioned earlier in this article.

At any rate, don’t pay attention to posts about Sonia disowning Rahul. You don’t need to worry about hoax warnings like this. Trust me, there are plenty of real digital threats that you should actually pay attention to.

Note: If you are reading this article using the Komando.com App, click here to see accompanying pictures.

One simple way to keep your browsing history secret