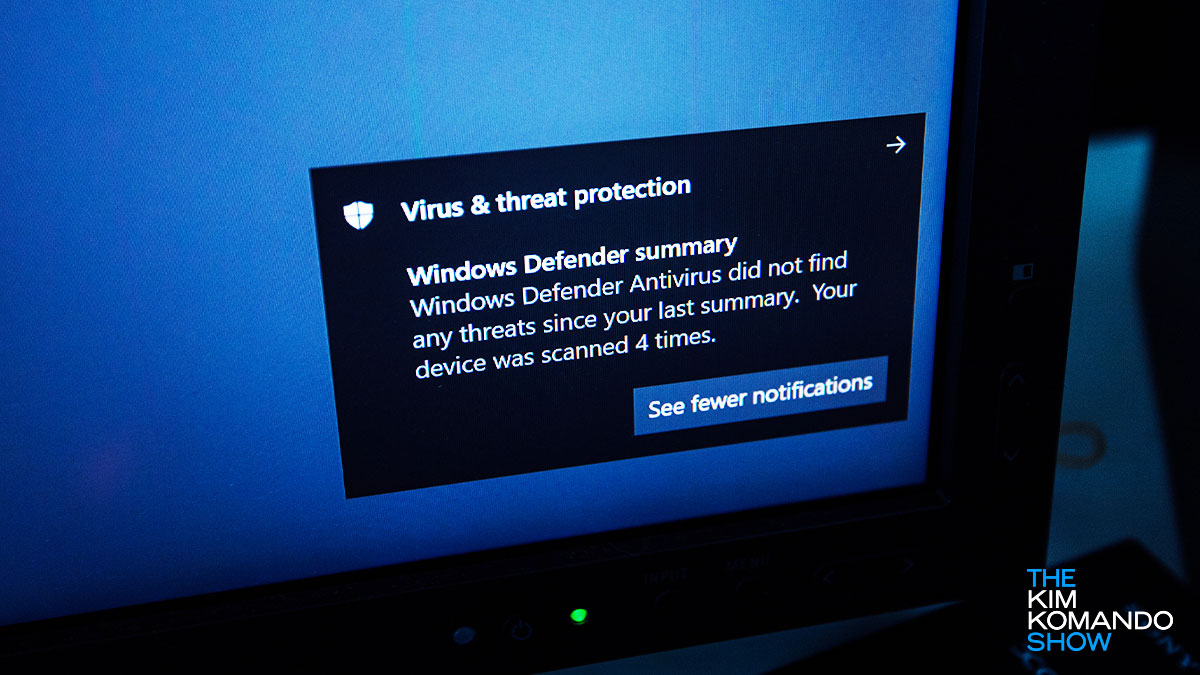 Did you really think you could go a day without hearing about yet another nasty Windows update? Well, despite COVID-19 changing much of the world, some things remain the same. The sun rises in the east, water is wet and Microsoft can’t push out a stable update to save its life.

Thankfully, this update isn’t related to the recent set of security patches released by Microsoft — which included fixes for 113 critical bugs. Tap or click here to see why this update is still worth downloading.

This broken update, on the other hand, prevents Windows Defender from fully scanning your PC. Try to run a scan, and you’ll get bombarded with error messages. Oh Microsoft, can’t you just slow down and get an update right for once?

Windows Defender is one of our top recommended antimalware programs due to how simple and powerful it is, along with the fact that it comes pre-installed on every Windows PC. Tap or click here to see if Windows Defender is enough for your needs.

So, when word gets out that a new update actively breaks Windows Defender it’s a tough pill to swallow. And that’s just what happened with a new batch of antivirus definitions that were pushed by Microsoft the morning of April 17.

Windows Security Intelligence virus-definition update 1.313.1638.0 was supposed to improve Windows Defender but ended up breaking it instead.

With the new definitions installed, running a full system scan in Windows Defender will lead to the program crashing, along with countless error messages from the event viewer and Windows Security. Quick scans, strangely enough, aren’t affected at all.

The glitch is apparently caused by Windows Defender mishandling files it scans, particularly filenames that feature two periods in a row (like “myfile..now.jpg”). This includes system files with two periods that you might not have created as well.

As bad as this bug is, there is thankfully a fix. The catch: It’s another update! It’s almost comical at this point.

Updating the updates so your updates can update

To fix the Windows Defender bug, you’ll need to update your system and download another set of virus definitions (version 1.313.1687.0.) that will repair the buggy ones released earlier.

If you see version 1.313.1687.0., update immediately and you should resolve the problem for now. Or at the very least until Microsoft gets eager to drop another set of buggy updates on our collective heads. Good grief!

Related: Tap or click here to discover a free tool that gets rid of malware and ads

We spoke too soon. Microsoft has officially announced its next major Windows 10 update in a new blog post on the company website. This update, titled Windows 10 May 2020 Update, is set to be released on May 12 — just in time for the next “Patch Tuesday.”

Microsoft says the update will mostly include bug fixes, and will also enhance several existing features of Windows 10 like tablet mode, Cortana and virtual desktops.

We’re also expecting a new set of glitches to complain about as well. How could we not? It’s only been the case the last several hundred times!

But then again, this time around, beta testers are getting a month’s head start to try out the update before the general public gets a hold of it. Maybe they’ll be able to find some of the more glaring issues in time for the official release.