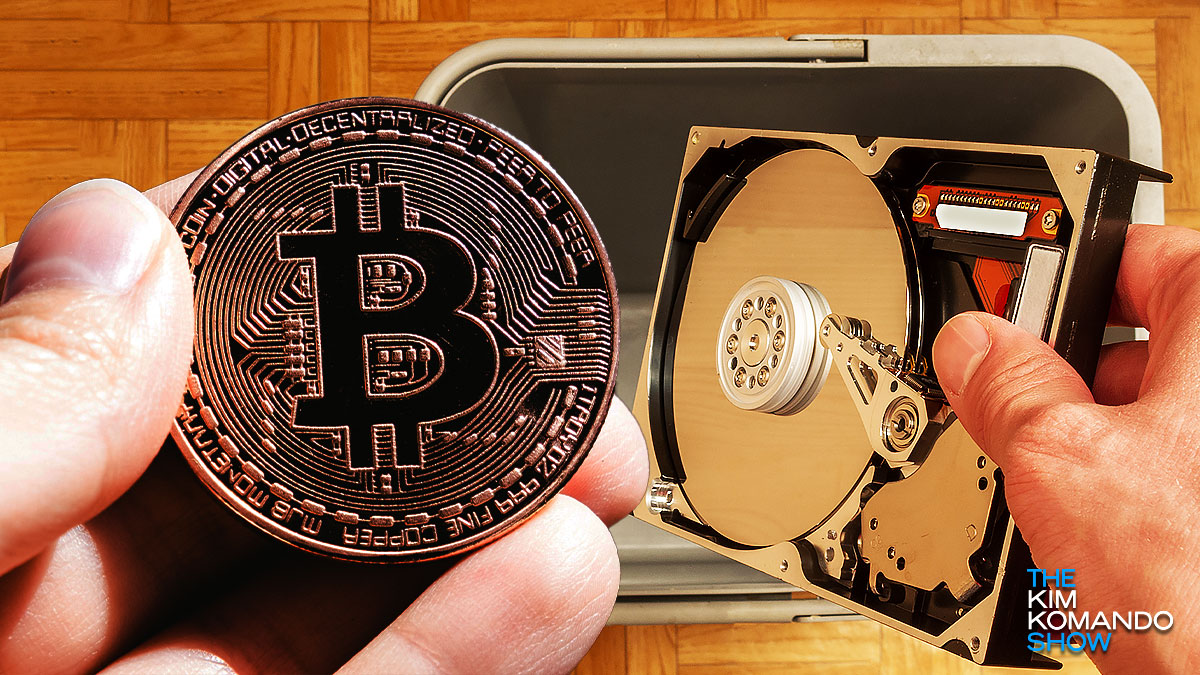 Cryptocurrency entered the mainstream via social media, with proponents and influencers touting its massive moneymaking potential. But as with any investment, there is always risk, and crypto is particularly volatile.

Aside from the inherent risk of crypto, there are outside forces that can wipe out your investment. One anonymous crypto investor lost everything because of a malicious link. Tap or click here to hear Kim’s report.

There are other ways to lose it all, as one unfortunate crypto investor found out. Keep reading for details on this crypto nightmare and ways to prevent it from happening to you.

Before we dive in, this is not financial advice. Cryptocurrency is inherently risky, and you should never invest money you are not willing to lose.

James Howell of Wales began mining Bitcoin in February 2009, shortly after it first became available. He built up 7,500 Bitcoins for next to nothing. James saved the Bitcoin in a cold wallet on his Dell laptop. More on that later.

“After I had stopped mining, the laptop I had used was broken into parts and sold on eBay,” James told The Telegraph in 2017. “However, I kept the hard drive in a drawer at home knowing it contained my Bitcoin private keys so that if Bitcoin did become valuable one day I would still have the coins I had mined.”

In 2013, while clearing out his office, James threw away the hard drive. At the time, the value of his Bitcoin was about $7.5 million. That’s petty cash compared to today. The value of 7,500 Bitcoin is nearly $300 million at the time of this writing.

The hard drive is now in a landfill in Newport, Great Britain. He’s asked the city council for permission to search for the drive. He even offered a percentage of the value of the Bitcoins but was turned down.

In May last year, James had a Zoom meeting with two Newport officials, who still turned him down, as reported by The New Yorker. In November, he was told that the “project was too uncertain and the process too environmentally risky.”

James estimates that the excavation could take up to a year for a professional team and cost hundreds of thousands of dollars. He knows when he threw the drive away, so he can use that to find a grid reference of where it’s buried.

James reached out to Ontrack, a data recovery firm in Minneapolis, regarding the data itself. The company estimated an 80-90% chance of recovering the data if the disk wasn’t cracked.

James stored his crypto keys in a cold wallet, which means his key was stored on a physical drive. This could be a plain hard drive or a purpose-built drive. This is usually the safest way to store your crypto keys, i.e., the passwords that give you access to your cryptocurrencies.

A hot wallet, by contrast, is stored in an app or other software. While this makes it easier to exchange crypto, it’s less secure.

Cold wallets are safer, but only if you keep the physical device safe. Keep it and your internet connection secure. And never share your private key with anyone. Tap or click here for more on protecting your crypto.

Buying and selling crypto? The IRS wants to know

Cryptocurrency tip: One method to lower your investment risk