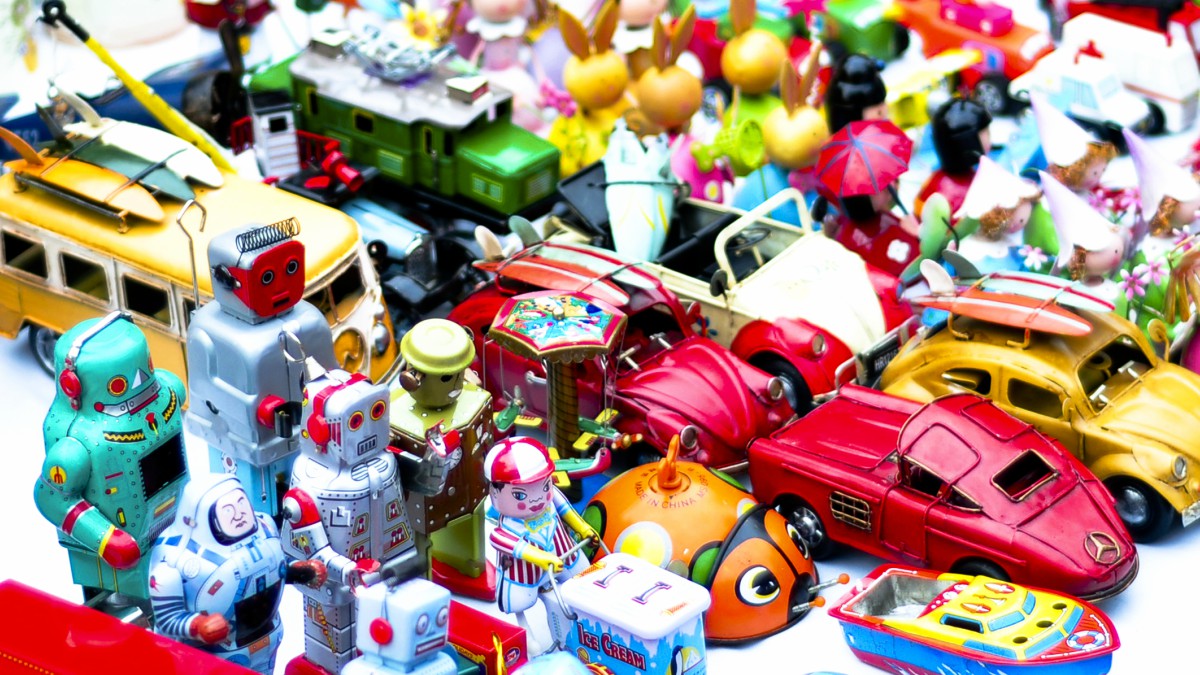 How cool were toys back in the day? Think about all the action figures, games, models and other playthings that filled your toy box, closet and bedroom. These low-tech goodies provided hours of fun and allowed your imagination to soar.

While many were mass-produced fan favorites from movies and TV shows, there were also toy collections that came out of nowhere that became instant hits. Tap or click here to see how toys are made.

As the years and decades go by, you may not give those toys from your childhood a second thought; however, if you had the foresight to hang on to a few, you may be in luck. Some classic toys can get you big bucks. Here’s a rundown of the most notable toys that are worth a lot more today than they were in your youth.

This franchise remains strong today, as evidenced by its recent blockbusters. As “Star Wars” fans flock to theaters and the namesake annual celebrations, many gather memorabilia from around the world. If you have a few of these vintage figures, you could be in for a big payday.

One of the most sought after rare “Star Wars” figures is the bounty hunter Boba Fett. While they can command around a few thousand, one in mint condition, still in its box, broke estimates and sold at auction for $32,000 in 2016.

A 1978 Luke Skywalker action figure, which is one of only 20 in existence, sold for $25,000 at a 2015 Sotheby’s auction. This rare action figure was one of many pieces in a collection that pulled in over half-a-million bucks for its owner.

Produced by the millions, these soft, furry animals were loved by children across the globe and quickly became collector favorites; however, due to an error in manufacturing, only 2,000 of the Peanut Royal Blue Elephant were made. Although darker in color than initially planned, this collectible can bring in as much as $5,000.

Who didn’t play this classic board game? With the many updated versions, you can find vintage Monopoly editions worth more money than was included with the game.

The game’s inventor, Charles Darrow, drew the original version by hand on oilcloth, which sold for $146,500 at Sotheby’s in 2011. Don’t despair, there are plenty of vintage versions and limited editions that can haul in a few thousand, depending on their conditions.

This military hero was introduced by Hasbro in 1964 and continues to be a favorite with collectors. But prices vary quite a bit with G.I. Joe memorabilia. One of the most valuable, a 1963 prototype “Toy Soldier” sold on the auction site eBay for $200,000 in 2003.

Although other G.I. Joe collectibles won’t demand six figures; there are plenty worth some bank including the Aircraft Carrier U.S.S. Flagg (1985) and the Atomic Man Para-Drop (around $6,000 apiece), while the Talking Man of Action (1975) commands a bit less, about $5,000.

Unlike the high-tech drawing apps of today, the Lite-Brite was a bit a whole lot cruder with its translucent plastic pegs, black paper and light bulb. While first marketed in 1967, versions of this toy from the ’70s and ’90s can bring in almost $300.

You can find collectors willing to pay $1,000 and up for the right card, and even more for those in their original packaging. Adam Bomb sells for around $3,000.

Even today, the “heroes in a half-shell” are revered by many. Over the almost four decades since first released in 1984 as comic book characters, the figures named after four Renaissance artists have taken to both the big and little screens multiple times.

Michelangelo, Leonardo, Donatello and Raphael each pull in about $400 to $900 if in mint condition. The Turtles’ Party Wagon is worth about $1,000.

As a kid, you couldn’t help but look up to Batman. He was the superhero with gadgets galore and a sidekick to boot. Vintage action figures average about $500 today, while the Batmobile garners around $850. An original 1970s Utility Belt kit complete with accessories and Gotham City map can bring in over $3,000.

Ever wonder how much it would cost to be Batman? Tap or click here to find out.

Created by Xavier Roberts in 1978, these dolls came complete with accessories, birth certificates and adoption papers. There were an instant hit with girls and boys alike. Many of the original dolls are worth a few bucks, but prices vary.

Today, James Dudley, in original packaging and papers, can net you about $3,000. You can score around $850 for the three-doll Mark Twain Collection in excellent condition with papers.

Masters of the Universe

If you were a fan of He-Man and Skeletor, you know all about the “Masters of the Universe,” and most likely have action figures tucked away in your attic or closet. In the ’90s, Wonder Bread offered Wun-Dar-He-Man as a giveaway with the purchase of a loaf. Today it grabs about $500.

The Faker, the evil robotic imposter, action figure may earn between $300 and $1,000 in its original packaging, while the Eternia play set, considered by many as the Holy Grail of “Masters of the Universe” memorabilia, fetches around $1,600.

As video games continue to evolve and sprout competitions around the world, a few classic cartridges can bring you some serious cash. Atari’s Air Raid sells for about $3,000 — and that’s without its box. River Patrol, Video Life and Beany Bopper are each valued at over $500.

Of course, you can’t talk about video games without mentioning Nintendo. Many original Nintendo cartridges carry hefty price tags. Look to grab about $400-$700 for Mario Kart 64, while the 1985 version of Super Mario Bros can haul in more than $2,000.

If you miss those classic games and don’t have the old consoles, tap or click for an online source that lets you play just about every classic game ever created — completely free.

Here’s the second doll to make the list; however, the price of American Dolls made them an expensive gift for little ones.

If you were a lucky recipient and have one of the discontinued Pleasant Company dolls, Samantha Parkington, Kirsten Larson or Molly McIntire, you may be even luckier. These dolls can net you thousands. A Pleasant Company original Samantha, in excellent condition with all original outfits and accessories can get you $4,000.

Maybe you weren’t the collector of action figures or dolls. You were the kid who loved water fights and cherished your Super Soaker. Classic versions can yield a nice profit today. A Larami Super Soaker XP70 from the ’90s goes for as much as $500.

While Hot Wheels are still cool with younger generations, vintage models are quite valuable so you may want to dig them out.

The Treasure Hunt series has several worthy pieces including the ’67 Camaro, deemed the “Holy Grail,” listed over $1,000, while its fellow Treasure Hunt collectible Neon Green VW Bug has sold for $305.

Ever wonder what it’s like to ride a Hot Wheels track? Tap or click here to get a toys-eye view.

One of the most prized Hot Wheels was a prototype that was not widely produced. The ultra-rare 1969 Volkswagen Beach Bomb is valued at around $125,000.

Not as old as the rest of the toys on this list, Pokémon cards were first published in 1996 and hit the collector’s market demanding crazy prices. A misprinted Fossil Krabby — part of the fossil symbol is missing — is worth $5,000.

Do you have any of these toys? Clean them up and put them on display or sell them to the highest bidder. Whatever you do with them, at least you’ll always have those fond memories to look back on.