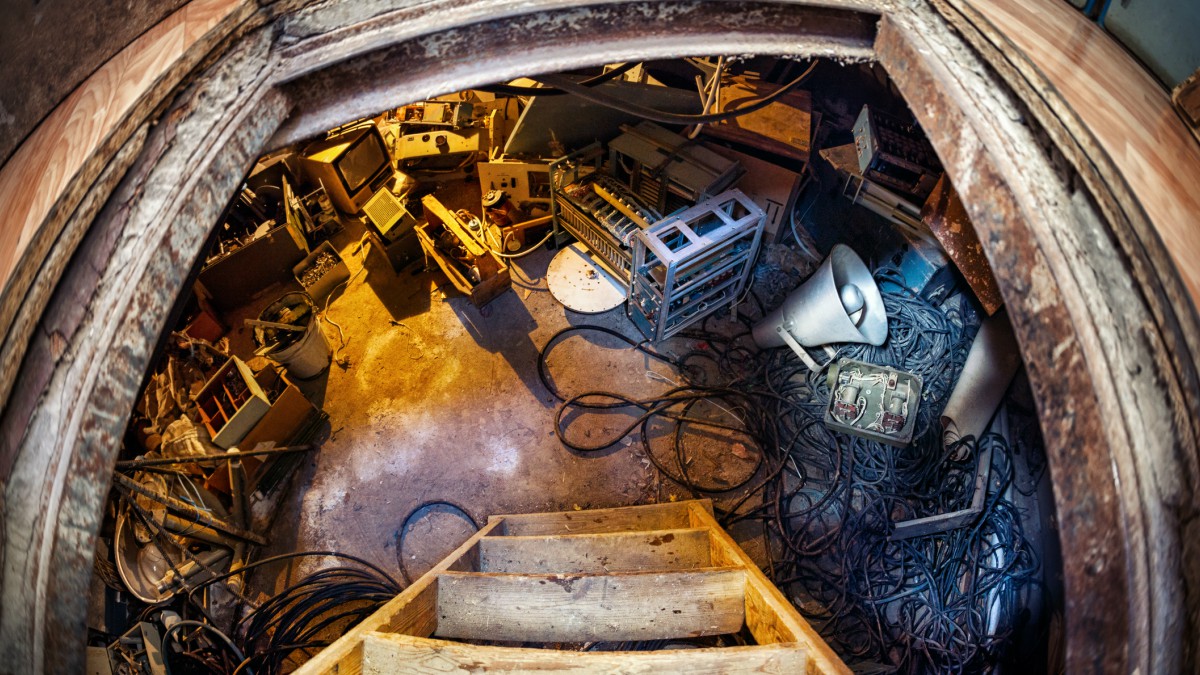 Everybody has one of those closets or spots in the basement where things, once-loved, remain forgotten after being replaced.

Admit it, while you enjoy the features of the latest devices and gadgets, you still hold a soft spot for that old junk, hence your growing collection of old cellphones, computers and other gadgetry. Tap or click to learn how a bunch of old gadgets makes stunning music.

These days, we hear stories of vintage items selling for a small, and sometimes a large, fortune. No reason you should sit back and watch as everyone else enjoys their riches. If you’re harboring any old tech, it’s time to see if any of it’s worth big bucks. Here are a few finds that can rake in the cash.

Let’s face it, Apple products hold their value well. A few items from the company’s history have realized record prices on the auction block.

Decades before it became the world’s first $1 trillion company, Apple’s co-founders peddled a kit to build a computer. The aptly named Apple I required the addition of a monitor and keyboard at the customer’s expense.

Records indicate only 200 were produced, with only 63 known to exist today — the most valuable of eight known full-working units sold at auction in 2014 for $905,000.

Released in 1984, two years after initially planned, the original Macintosh was introduced to consumers with a George Orwellian commercial during the Super Bowl.

Despite stiff competition from IBM and a price of almost $2,500, the Macintosh went on to become the first successful mouse-driven computer. You can expect up to $2,500 if you are lucky enough to own an original working model.

Even Apple’s failures can earn you some bank. The company’s desktop computer, Lisa, which shared its name with Steve Job’s daughter, was marketed to business customers and carried a price tag of $9,995.

Deemed superior to the Macintosh at the time, Lisa’s high price proved too costly and caused its failure as customers turned to IBM’s less-expensive PCs. Because these systems are difficult to come by these days, a working unit can fetch upwards of $50,000.

This beloved device from the early 2000s introduced the Click Wheel to music lovers everywhere. The feature proved so popular that it stuck around for six generations of the iPod and made its appearance on the Nano and iPod Mini.

While it’s not difficult to find used Classics floating around the internet for a few hundred bucks, one factory-sealed 5GB first-gen iPod Classic sold for $20,000 in 2014. A U2 edition iPod (30GB) sold for $90,000. Ready to party like it’s 2007? Tap or click to learn more about Apple’s iPod touch comeback!

The most recent device to make its owner some money is the first-generation iPhone from 2007. Although young in years, you can see a decent return on your initial investment, depending on your device’s condition.

Apple isn’t the only manufacturer to make the most valuable list of old tech. While the companies are no longer around, these runners-up can still sell for big bucks.

During the Winter Consumer Electronics Show (CES) in 1982, Commodore Business Machines debuted its Commodore 64. Without any new computers hitting the market from its competitors, this $595 programmable computer immediately went into production. The Commodore 64 would become the best-selling computer in history.

Although this system remains pervasive, they still can garner hundreds of dollars. One in boxed, mint condition could fetch around $1,200 on auction sites like eBay. If your model falls short, consider repurposing it. Tap or click to see how one woman created an awesome bass guitar from a Commodore 64.

Considered by many as the catalyst for the personal computer transformation, the MITS Altair 8800 was the brainchild of Ed Roberts, owner, and CEO of MITS. Up until the Altair 8800, MITS sold calculators and model rocket parts.

Thousands of models were sold via mail order and have become a favorite among collectors. These days, a working unit can sell for up to $3,000.

The Commodore 65, an updated version of its predecessor, is a prototype computer that offered backward capability with the Commodore 64 and included advanced Amiga features.

Although never officially released, reports indicate 200 to 1,000 units made their way to the open market. A model today could be worth up to $70,000.

Our list wouldn’t be complete without a section of nostalgic game consoles that sell for plenty of dough.

Even though this game console sold millions after its launch in 1977, few remain factory-sealed. Because used Atari 2600 systems are still plentiful, they don’t necessarily see high prices; however, certain 2600 games can bring in thousands of dollars.

What kid didn’t want a Super Nintendo, or Super NES, under the Christmas tree back in the ’90s? Just shy of 50 million consoles sold worldwide.

Still a favorite today, a used system can bring about $200 while an unsealed, boxed model will go up to $800.

Exclusively released in Japan in 2005, the Nintendo Game Boy Micro Mother 3 Deluxe edition is worth some serious change. If you have a factory-sealed one, collectors may be willing to pay upwards of $2,500. A used unit can bring up to $900.

The Vectrex Arcade Game system, developed by Smith Engineering in 1981, was licensed by General Consumer Electric shortly after and eventually ended in the hands of game company Milton Bradley in 1983.

By December 1984, the Vectrex system was no more. Although this system was short-lived, it is a favorite among gamers. Today, you can grab up to $800 for a model in working condition.

While you may not give these gadgets a second thought, you may want to check your storage area after you see the prices they can go for these days.

It’s true, MP3’s and CD players have not been around forever. Whether you experienced life with a Walkman cassette player back in the day or were introduced to the 1970’s tech by Chris Pratt’s character (Peter Quill) in the “Guardians of the Galaxy,” you should have an appreciation for the world’s first portable music player.

If you have one sitting around, dig it out and look up the model. A Sony Walkman can fetch up to $700 depending on condition.

Introduced in 1978, Texas Instruments Speak & Spell was a revolutionary device. This learning “toy” tool used speech recognition unlike any before, to teach children how to spell.

While these toys don’t bring big bucks, around $50 to $100, it may be worth a quick gander around the house. Tap or click here to learn about the place Hollywood turns to for vintage gadgets.

Yep, this is a thing! This ’90s Peloton predecessor sought to combine exercise and gaming into a stationary bike. Life Fitness and Nintendo joined forces to bring this immersive experience to families everywhere in an effort to combat obesity.

The bike could only play two games, Mountain Bike Rally, which came bundled with the bike, and a combo cartridge that included Speed Racer, and retailed for $799 when it debuted in the early ’90s. Today, you may score up to $2,700 for the bike and game cartridges.

Who knows what worthy items you have hiding around your home. A bit of rummaging through your attic or basement may unearth a great find worth a fortune.