Training your brain is good for your health. Luckily, it’s easy to keep your mind sharp with trippy optical illusions.

That’s because brainteasers challenge you to think differently. They can easily trick you through hallucinatory visuals that put your eyes and mind to the test. Tap or click here to see if you can find nine hidden images in less than a minute.

We rounded up some of the most challenging visual tricks on the web. Some of these images will reveal how your brain makes sense of the world. Others will have you seeing things that aren’t even there.

Our eyes have complex ways of interpreting the world around us. Clever optical illusionists know how to turn our anatomy against us. In other words, they create brilliant images designed to test your eyes and train your brain.

For example, check out the image below. It looks like it’s moving, doesn’t it?

Get this: It’s actually completely static. The creators behind this image know the complex way the human mind processes luminances. Luminance refers to the intensity of light that comes from a particular area in a given direction.

There’s a bit of a lag when our mind tries to process the different light intensities in this image. When our brain lags this way, we see animation that isn’t there.

The illusionist behind the image above understood how the brain and nervous system work. Thus, they used neuroscience to create stunning art.

It almost looks like waves distort the image, but it’s a simple motionless picture. Thanks to different color shades throughout the image, you see movements that aren’t there.

That’s just one of many examples. One of the most famous peripheral drift illusions is “Primrose’s Field” by Akiyoshi Kitaoka. This quilt-like optical illusion can make you feel dizzy after a few seconds.

There are two reasons why this unmoving image looks like a flag billowing in the wind:

We see the waves because of fixation jitter or how we focus our gaze on a particular location. Our eyes will move involuntarily while looking at peripheral drift illusions. Or, as scientists would say, we’re experiencing fixation jitters.

Think of them as eye twitches. You can’t control them. Thanks to fixation jitters, the illusion looks like it’s moving.

RELATED: 4 optical illusions that will test your brain

Here’s another mind-bending illusion from Professor Kitaoka. It’s called “Rollers” because it looks like three rollers are rotating in different directions.

As you can tell, once a master illusionist understands how peripheral drift works, they can create startling visual effects.

If you’d like to see more brain-bending images like this, check out Kitaoka’s site. Then again, you might want to show your newfound neuroscience knowledge to your friends. In that case, you might want to upgrade your coffee table with a book on optical illusions.

Luckily for you, Kitaoka compiled mind-opening optical illusions in a book. As an Amazon reviewer said, “The opticals are very useful as a meditation aid. It is best to start in short intervals and work up to longer periods of time. Incredible!” 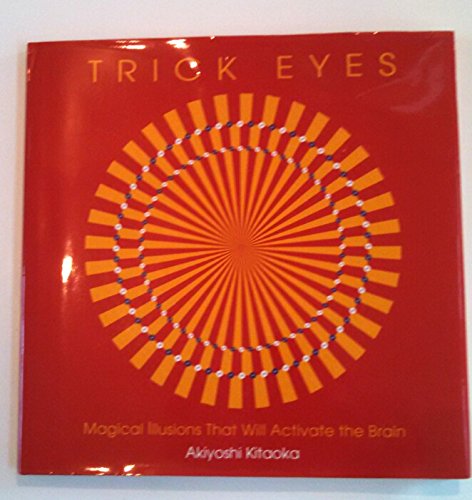 Trick eyes magical illusions that will activate the brain

Professor Kitaoka teaches psychology at Ritsumeikan University in Kyoto, Japan. He creates and designs many optical illusions. Thanks to his neuroscience know-how, he makes off-kilter special effects.

For example, this two-dimensional checkboard looks like a 3D circle is jutting out. Fittingly, it’s called “A Bulge.”

Of course, it’s not actually bulging. This picture is just a patchwork of squares with clever variations in shape designed to make you see effects that aren’t there.

It looks like it’s bulging due to the distance between the dots and the edges of the squares. Since those aren’t touching the borders, there’s a margin between them.

Therefore, our brain might see those margins as tilting lines. Slate writer Phil Plait theorizes that the different ways the dots are arranged are why we see the bulging circle at the center.

It’s similar to the Hering Illusion, a famous visual trick made of lines and a single point. It’s named after German physiologist Ewald Hering, who discovered this trick of the eyes in 1861.

Check out the image below. It’s made up of parallel lines over lines radiating from a single point in the center. Those parallel lines look like they’re bending — even though they’re completely straight.

This optical illusion fools us into thinking the two red lines are bulging outwards due to how our brains interpret distance and movement.

If you love trippy optical illusions, check these out

Test yourself with more than 15,000 brainteasers, riddles and logic problems

If you can solve this riddle in 10 seconds, you beat 99% of people

Are you smarter than a 3rd grader? This math problem is perplexing the internet