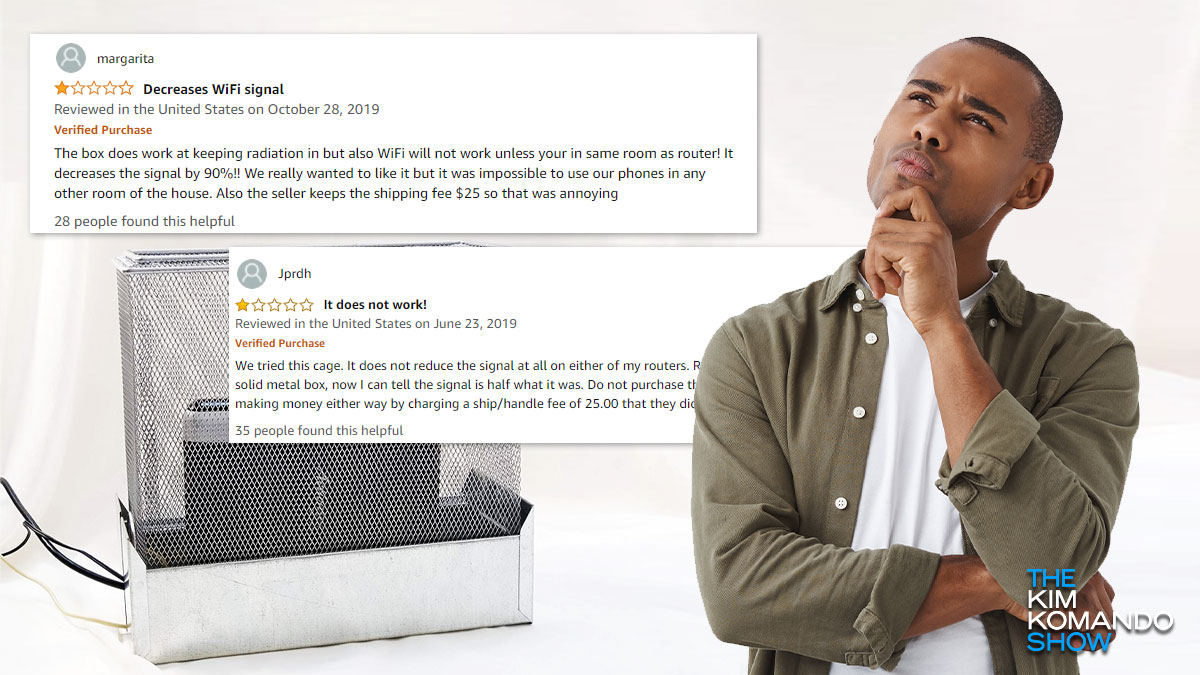 Conspiracy theories have become a common presence on the web. You don’t even have to go far to find them — simply venture deep enough into the comments section of any news article and you’ll learn about secret societies, reptilian overlords and harmful radiation from cell phones.

Some of the most popular theories circulating right now involve 5G, the latest wireless data standard. 5G is blazing fast, but that hasn’t stopped conspiracies from forming about how it causes COVID-19 or brain cancer. Tap or click here to get the facts behind 5G and coronavirus.

Understandably, some people might be skeptical about new technology. But some conspiracy theorists have started advising readers to enclose their routers as a form of protection. Not only is this ineffective at stopping the spread of 5G, but it will also make your internet speeds worse!

‘Despite all my rage, I am still just a router in a Faraday cage’

For those who aren’t aware, a Faraday cage is a special type of enclosure designed to shield equipment from radiation. When a device is enclosed in a cage, electromagnetic radiation cannot penetrate or escape.

Faraday cages have a wide span of industrial uses, but router shielding isn’t one of them. In fact, putting your router inside of a Faraday cage is an easy way to block your Wi-Fi signals and mess up your internet connection.

That hasn’t stopped a cottage industry of Faraday cage products from exploding on marketplaces like Amazon and eBay. These items are targeted at conspiracy theorists, primarily those skeptical about 5G and other forms of radiation common in modern times.

So apparently putting Faraday cages around routers has become a thing for the 5g conspiracy nuts and there are companies out there ready to cash in.

My sides are in orbit. pic.twitter.com/mGcud5Kb70

The cages are priced rather high and tend to fetch upwards of $70 or more. Unfortunately for the many shoppers who fell for the trick, they’re reporting that their internet signals aren’t as strong as they were before putting their router in the cage.

Believe it or not, they actually can’t complain that they were ripped off. Faraday cages are working exactly the way they’re supposed to. The people selling them are conveniently leaving out an important detail and taking advantage of unfounded fears.

Tap or click for compelling reasons why 5G and COVID-19 have nothing to do with each other.

Should I even be worried about 5G?

As we mentioned above, 5G is relatively new. There is no evidence that it is harmful to the human body, but the standard hasn’t existed long enough for long-term studies to be conducted. But even then, there’s hardly a reason to believe it would pose any danger due to how electromagnetic radiation works.

Any wireless device, from your smartphone to your TV remote, uses electromagnetic radiation to communicate. The word “radiation” may sound scary, but ordinary things like light and radio waves are a form of radiation.

In that case, what sets the radiation from your phone apart from the kind at Chernobyl? It’s a little something called “ionization.”

Radiation used by wireless technology is “non-ionizing,” which means the particles do not have enough energy to move electrons from atoms (which changes them). On the other hand, Ionizing radiation has so much energy that it can alter the cellular structure of living creatures. This is “the bad kind” of radiation that can cause cancer.

Feel a bit better about wireless tech? In that case, don’t bother spending money on a Faraday cage for a router. Installing one will only make your internet worse. It’s a shame conspiracy theorists can’t see that there’s a conspiracy to rip them off!