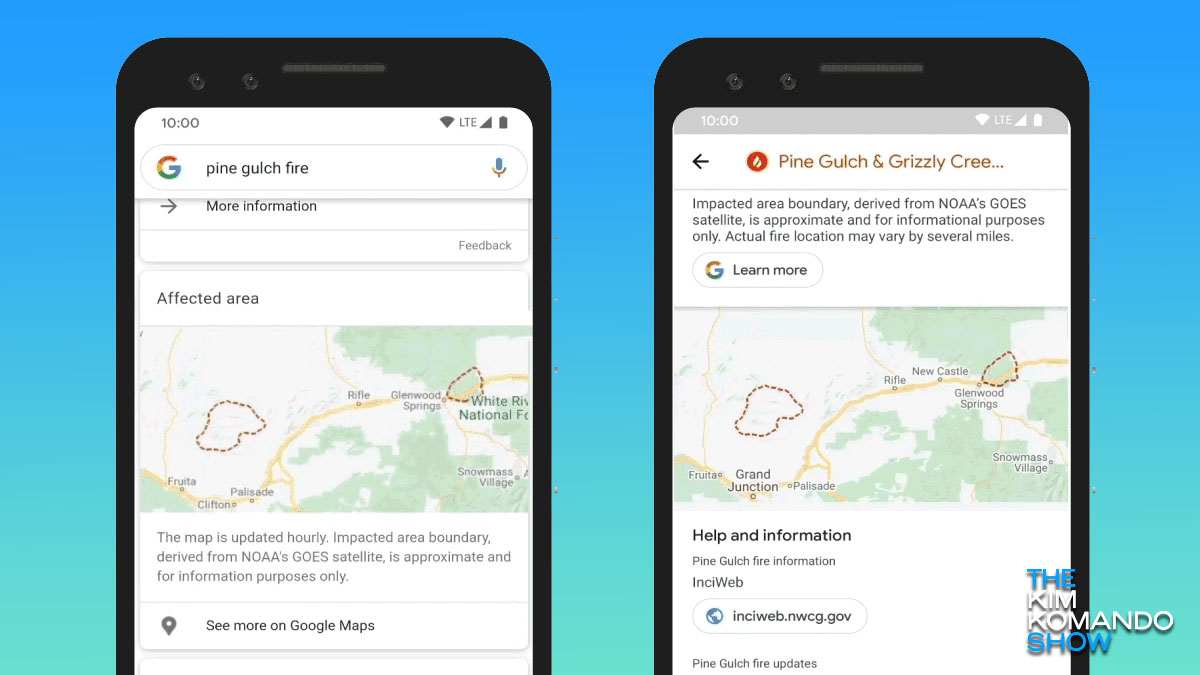 As anyone who lives in California can tell you, late summer is wildfire season. During this time of the year, the dry Santa Ana winds kick into gear, which can spread small sparks over a wide distance until massive flames erupt.

The dry weather and wind combined with heavy underbrush make the perfect ingredients for wildfires. And now, it seems as if this phenomenon will happen every year going forward like clockwork. Tap or click here to see how the similarly dry Australian wildfire season could be seen from space earlier this year.

With wildfires becoming a regular occurrence in the U.S. each year, Google has decided to seize on the opportunity and give you an easier way to track fires from the comfort of home. Now, instead of tuning in to your local news channel or radio station, you can open Google Maps and see if a fire is brewing near you.

In a new Google Blog post, the company revealed it would be updating its signature Google Maps and SOS Alert to include more information about the size, boundaries and locations of fires within the U.S.

This information comes at a critical time as California grapples with yet another year of devastating brush fires and damage. But California isn’t alone, it’s more common for wildfires to spread these days in states across the country like Texas, North Carolina and Georgia.

In the update, Google included near real-time data from satellite feeds that provide an accurate picture of a fire’s current boundaries and location. This will appear on both Google Maps and ordinary Google searches for information about local fires.

According to Google, when you search for things “like “wildfire in California” or a specific fire like “Kincade fire” in Search,” you’ll see a wildfire’s approximate boundary, name and estimated location, as well as useful news articles and resources from local emergency officials.

And speaking of traffic, the Google Maps version of this wildfire feature also includes road closures and other traffic adjustments that may occur in relation to fires.

With so much data at its fingertips, it’s heartening to see Google putting what it controls to good use. If only we could say the same about user data. Tap or click here to see what Google knows about you.

Wait, did Maps just get better, too?

If you rushed to flip open Google Maps after reading the story above, then you probably noticed it doesn’t quite look like it did earlier. As it turns out, this is yet another update from Google designed to enhance the user experience on Google Maps.

Per the new update, Google has added enhanced topographical features that give a more accurate picture of what an area’s terrain looks like. This means that high elevations are more clearly color-coded, which will no doubt help hikers, explorers and surveyors as they scale the heights of our natural areas.

But it’s not just the forests and hills that received updates on Google Maps. City-slickers will also see updated Street Views that apply a consistent scale between roads and buildings around them. In addition, road islands, turnabouts and other urban features will be visible to help pedestrians navigate more effectively.

Google’s “natural features” option for terrain is available now on Google Maps, but the updated city views aren’t on every device just yet. According to Google, these new street maps will be launching for “London, New York, and San Francisco in the coming months,” with other cities to follow afterward.

If you think this update is cool, wait until you see what Google Maps has in store for the future.

Tap or click here to see how Google is adding Augmented Reality to its Maps app.