You’ve heard that expression. Does a falling tree make a sound if no one is there to hear it?

You might update that in the digital age by saying, Did it really happen if you didn’t capture it in a selfie? Sure, you traveled to Paris but what good is that if you don’t post a selfie with the Eiffel Tower on Facebook and Instagram?

The same is true with voting. Today is the crucial midterm elections that will determine if Americans embrace President Trump‘s agenda or reject it.

But does your vote really matter if you don’t capture it in a selfie? You might be tempted to take a selfie in the voting booth, but that can land you in jail or get you fined.

Instead, stick to a selfie of you with your I Voted sticker. That’ll get the word out and keep you out of the slammer.

It turns out that it’s not allowed in 21 states to take selfies from the voting booth. Those states include Colorado, Florida, Illinois, Nevada, New Jersey and Ohio.

It’s banned in another six states that do allow you to take a selfie with an absentee ballot. Those states include Arizona, Iowa and Texas, plus Washington D.C.

You can post a selfie from the voting booth if you’re in California, New York, Washington and 20 other states. So, vote and share your voting booth selfie with the world!

Bonus: Hacked: Tens of millions of US voter records are being sold on the Dark Web, what this means to you 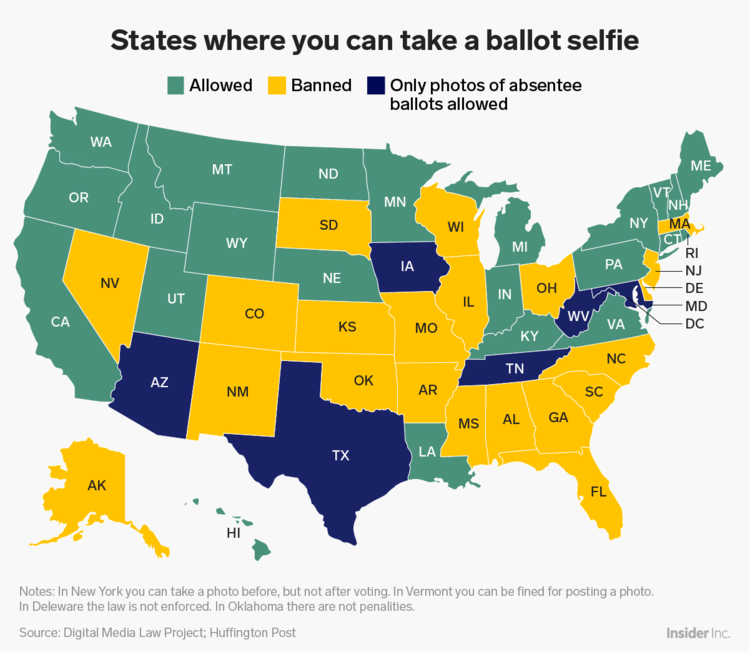