We are all so used to seeing kids with their faces engrossed in a small rectangular object that connects them with the rest of the world. The object, of course, is a smartphone. Distracted pedestrians have become a serious danger to the safety of our streets, and despite our disdain for such behavior, we are likely guilty of it, too.

A young girl walking with her eyes on a small rectangle in her hand; such a common sight now that it was shocking to most viewers when a painting from the 1850s displays the all-too-familiar scene. This immediately prompted conspiracies about time travel.

Is this an early portrayal of the future we now live in? Or is there a simpler explanation to this painting that sparked a firestorm of conspiracy on Twitter?

The painting, known as “The Expected One” was painted by Austrian artist Ferdinand Georg Waldmüller circa 1850. It is on display at the Neue Pinakothek museum in Munich. 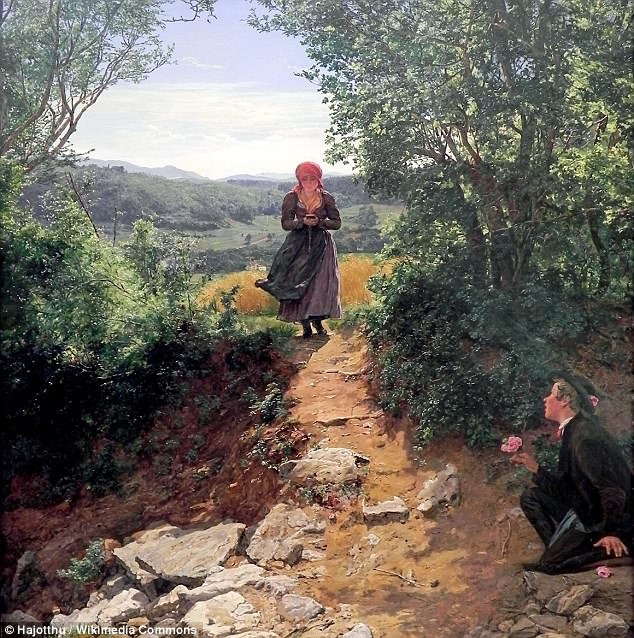 Seems remarkably anachronistic of today, does it not?

You may be wondering what the small “iPhone-looking” object in the girl’s hand is. It is surprisingly simple. It is a hymn book. The painting is also known as “Sunday Morning“ and portrays two children in their Sunday Morning Church clothing. The girl is likely reflecting on the prayers she would have been expected to know during this time period.

Retired local government official in Munich and art enthusiast Peter Russell summarized the situation nicely in an interview with “Motherboard,” “What strikes me most is how much a change in technology has changed the interpretation of the painting, and in a way has leveraged its entire context.”

Indeed we do automatically see that tiny rectangle in the girl’s hand as a smartphone because it is a sight we are so familiar with. It is likely that in the late 1800s, everyone would have seen it as a prayer book for the same reason.

It is amusing when examples like this remind us just how much society has changed in the past century.

This city covered lampposts with airbags to stop “smartphone zombies”

Nearly 40 percent of the injured pedestrians involved in accidents in this Austrian city were injured because they were distracted by a smartphone device. Check out the hilarious solution that the city implemented to protect pedestrians from injury.

Tech security: How to wipe your phone or computer if it’s lost or stolen

Fed up? Alternatives to Google for search, email, messaging and more

The iPod is dead