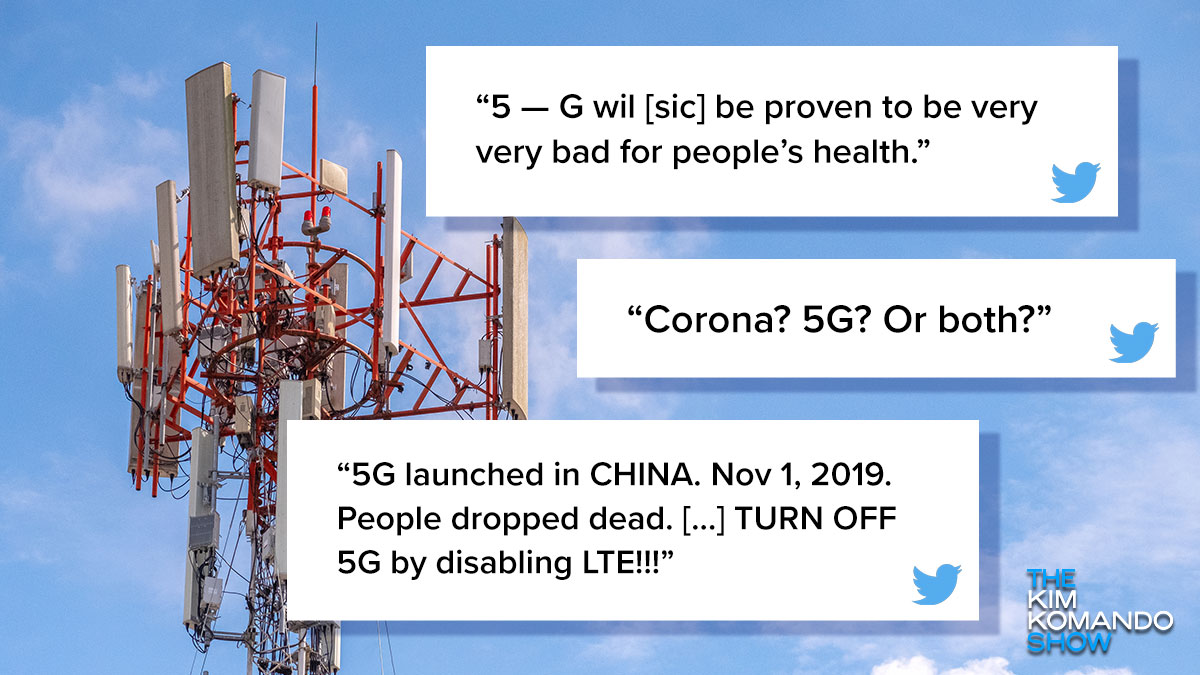 “A lie can travel around the world and back again while the truth is lacing up its boots.”

– Mark Twain (and others)

Arsonists in the United Kingdom and across Europe are destroying cell phone towers. Vodafone says that 20 towers were attacked, including one serving a field hospital treating COVID-19 patients. The arsonists believe that 5G networks are helping spread coronavirus.

This conspiracy theory isn’t the first one connected to either cell phone signals or COVID-19. But a lack of understanding how the cellular system works, blended with the overall global panic of the pandemic, is gaining traction.

Conspiracy theories aren’t the only thing spreading like wildfire online right now. Cybercriminals are after your $1,200 stimulus payment, and they have a slew of clever tactics. Tap or click for 7 scams you need to be on the lookout for.

Some people are ready to latch on to virtually anything when it arrives in the social media feed of celebrities. Woody Harrelson (who holds a B.A. in Theater from Hanover College) shared a report with his 2 million Instagram followers that claimed “5G radiation” is “exacerbating” the spread of the coronavirus.

John Cusack (who dropped out New York University after one year) tweeted to his 1.6 million followers, “5 — G wil [sic] be proven to be very very bad for people’s health.” He later deleted the tweet but not before calling his followers who disagreed with him “just DUMB and f—ing sheep.”

I included the educational background of these vocal conspiratorialists because no legitimate physician, researcher, engineer or scientist has found any evidence whatsoever that 5G causes, helps spread, or that exposure to 5G signals mimics COVID-19 symptoms.

Coronavirus myths and fake prevention tips are everywhere, too. Tap or click for a 90-second video that busts the myths I’ve seen spreading.

The lack of evidence

So why do people believe such loony conspiracy theories? According to Dr. David Ludden, writing in Psychology Today, one of the main reasons is that we, as humans, have a natural desire for control and security.

A global pandemic is beyond our control and threatens our security. In most conspiracy theories, followers claim that since there is no evidence to prove them wrong, the lack of such evidence becomes their evidence that they are right.

Most of the electronics that we use today emit some form of radiation. For those who don’t know better, that fact alone could frighten many people into signing a petition to ban all electronics.

The key is a bit of knowledge. Consider your non-5G cell phone. Common speculation is that it may cause brain tumors and skin cancer. Yet, according to the American Cancer Society, “the RF (radio frequency) waves given off by a cell phone simply does not have sufficient energy to damage or DNA or cause heating in body tissues.”

This explanation has been independently proven and re-proven many times with the best researchers and the best scientific methods. In fact, the FCC ruled months ago that we have nothing to worry about. Tap or click to hear what the commission had to say about cancer fears surrounding old and new smartphones.

However, if one becomes emotionally committed to a belief (and posting that belief publicly to the world on social media with a loyal following looking up to them), there comes a need to defend or surrender the argument. Obviously, some will go to outrageous lengths to avoid surrender. And thus, a conspiracy theory is fueled.

RELATED: Lightning-fast 5G will truly transform the way we live and work. Tap or click here for my take on what the 5G revolution means for everyday consumers.

The birth of the conspiracy theory

On January 22, 2020, a small Belgian newspaper “Het Laatste Nieuws” published an interview with Dr. Kris Van Kerckhoven, an unknown general practitioner. The newspaper’s headline read, “5G is life-threatening, and no one knows it.”

Dr. Van Kerckhoven claimed that 5G was dangerous and might be linked to coronavirus. That’s all it took. One small newspaper most people never heard of printed a frightening headline and one minor physician with no known credentials in radio frequency engineering and no scientific research to back himself up making up facts. Although the newspaper deleted the article from its website, the conspiracy was ignited and passed on through internet comments, blogs, and posts.

Naturally, if a medical doctor could make such outrageous statements with no evidence, then vapid celebs, looking for attention in a locked-down world, could have a field day. They blindly continue to spew out the ridiculous rumor to their fans.

This point brings us to today with endless online threats and silly hysteria. There’s also the vandalization of cell phone towers, the loss of which could cause even more turmoil and danger for medical personnel, first responders, hospitals and government officials during the pandemic.

The 5G network is simply made of radio waves that are received and emitted by mobile phones and the related cellular phone towers. Their radio waves are non-ionizing; that is, they cannot burn or cause cellular damage. They are like any other wireless network, with the exception that their radio frequencies operate in the low, mid and high microwave bands.

This array of frequencies can both penetrate buildings better and transmit much more massive amounts of data much faster than any cellular system that has ever existed. Yes, once again, radio waves are a form of radiation. So are television signals, shortwave radio, AM, FM and satellite radio, and even the light from the sun and household light fixtures.

The radio waves coming from your microwave oven are vastly more powerful than radio waves you will be exposed to coming from cellular systems, including 5G. But one thing 5G cannot do nor can any other radio wave is this: It cannot transmit a virus or bacteria.

For many, the COVID-19 and 5G rollout timelines, more or less, match up. And so, the argument is that 5G somehow weakens our immune systems, making us more susceptible to coronavirus.

And that’s the unproven and unprovable theory.

This science is settled. If television, radio in all its forms, satellites and cellular phones have not killed off the world’s population by now, they never will. Neither will 5G.

Get the facts on coronavirus

Our real enemy is deadly, invisible and very mobile. Researchers are scrambling to study this contagion and develop a vaccine. Until then, we must rely on expert advice.

Just as scammers and cyber-criminals are trying to take advantage of all the chaos, conspiracy theorists get a lot of attention for touting baseless claims as truth. This kind of rumor-mongering is reckless and irresponsible, and it can worsen an already dire situation.

My advice: Go to the source. The Center for Disease Control (CDC) has a comprehensive website and well-curated Twitter account. You will find life-saving information, unsullied by YouTube personalities or minor celebs looking to remain relevant as we focus on more important things like washing your hands often, avoiding crowds, staying home and always practicing social distancing while wearing a mask. Tap or click for more Twitter accounts you can rely on for trusted information.

No advertising, just news you can trust

My new free email newsletter “The Current” focuses on coronavirus facts and how tech is involved. I’ve covered what’s really happening with smartphone virus tracking to the latest online and even offline scams coming to your mailbox.

It contains no advertising. It’s just news you can trust. Sign up now while you’re thinking about it at Komando.com/TheCurrent.

And if your cell phone rings, you’re in no danger when you answer it.