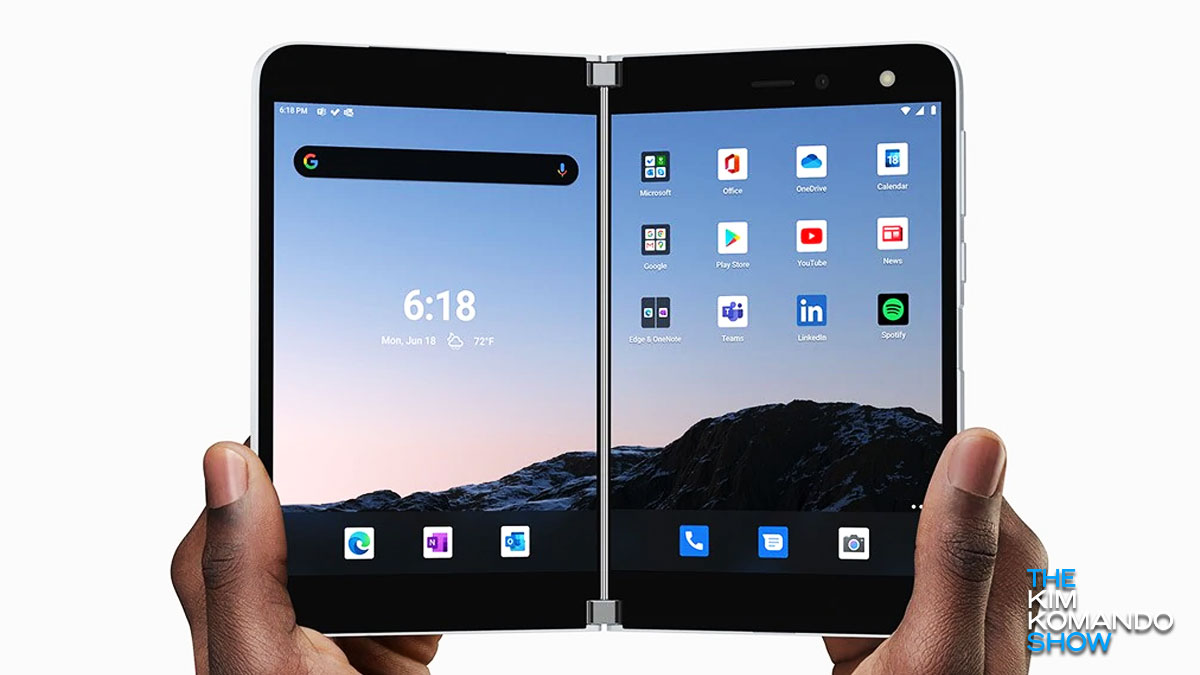 Do you remember the Windows Phone? Back in the halcyon days of 2010, Microsoft launched a line of smartphones designed to be cross-compatible with its own desktop operating system. While the hardware and software designs were nice, reception to these products was decidedly mixed.

That didn’t deter Microsoft from the hardware game, however. The company continued to produce and refine its Surface family of tablets and laptops. And now, the Microsoft Surface is one of the most popular Windows systems you can buy today. Tap or click here to see why we picked the Surface Go as one of our favorite laptops for 2020.

But Microsoft is finally jumping back into the world of smartphones with the release of its brand new Surface Duo handset. Designed to compete with other folding smartphones like the Moto Razr and Samsung Galaxy Fold, the Surface Duo brings a unique 360-degree folding screen and an oversized, work-focused keyboard. Here’s what we know.

Back in 2019, Microsoft revealed it was working on a new folding smartphone aimed at professionals with an emphasis on productivity. Dubbed the Surface Duo, the phone would include two 5.6-inch screens and a folding 360-degree hinge for multiple viewing options.

Tap or click here to see the Surface Duo announcement, along with everything else Microsoft revealed at its 2019 event.

And almost a year after this initial announcement, Microsoft is back with updates about its highly-anticipated handset. As it turns out, Microsoft has spent the duration of the pandemic perfecting the Surface Duo, and the new phone now has a target release date: September 10.

Here’s a quick breakdown of the phone and its stats: The Surface Duo features a unique clamshell design that offers more durability than smartphones that fold in the center of their screens. It runs a speedy Qualcomm Snapdragon 855 chip, includes an 11-megapixel camera and comes with a stylus like the kind you’ll find with Microsoft’s other Surface devices.

Best of all, Microsoft and Google have joined forces for the Surface Duo, which runs the latest version of Android by default. This gives it an advantage over Microsoft’s previous phone efforts, as the Duo now has access to an expansive software library right off the bat. And this isn’t even including all the pre-installed Microsoft apps like Office and Teams.

Tap or click here to see how Microsoft is promoting Teams during the COVID-19 pandemic.

This sounds awesome, but what’s the catch?

Of course, the Surface Duo looks like a great phone, but it’s not perfect by any means. For starters, it ships without any options for 5G, which will no doubt draw criticism from professional and heavy-duty users.

That’s…a lot for a brand new, untested folding device. And considering how debuts for phones like the Samsung Galaxy Fold have gone, it might be off-putting for potential early adopters.

Would you put all your chips on Microsoft’s latest handset? If you’re confident in the company’s ability to produce a killer professional smartphone, you can tap or click here pre-order the Surface Duo for yourself.

Just don’t be surprised if bugs and quality control issues are common in the earliest batches. In the world of tech, that’s the trade-off for having the latest and greatest gadgets.