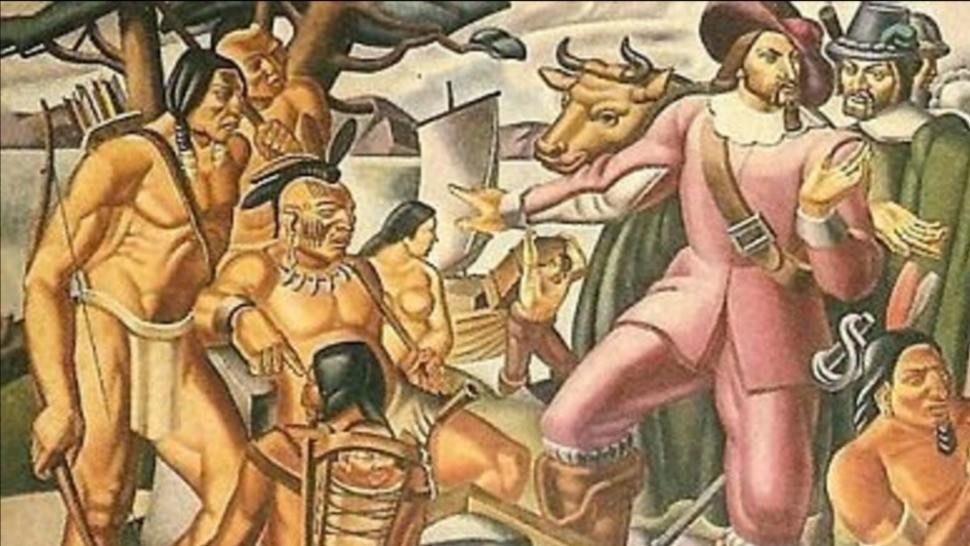 Smartphones were first released in the 1990s but they became really popular in the late 2000s. That means there’s no way a painting from 1937 could have a smartphone in it, right?

Right. Unless of course, someone used a time machine to visit artist Umberto Romano and showed him a smartphone while he was painting this image.

Yeah, that theory sounds a little crazy to me too! But some people are saying this painting is evidence of time travel! What do you think? Take a look at the photo below and focus on the Native American in the middle, foreground who is looking at something in his hand.

This painting is called “Mr. Pynchon and the Settling of Springfield.” It depicts William Pynchon, who was a fur trader who founded Springfield, Massachusetts in 1636.

Here’s a closer look at the man holding the “smartphone”: In all fairness, its size and shape do resemble that of a smartphone. Plus, he’s also holding it the way people hold phones today.

Psst: Click here to learn about the history of the cellphone.

Dr. Margaret Bruchac from the University of Pennsylvania said it does bear an “uncanny resemblance,” but it’s probably an iron blade. Historian Daniel Brown said the object is probably a mirror or a religious text.

What do you think the man is holding in his hand? Is it a smartphone that proves someone out there is traveling through time? Or is it something else that was around during the 17th century? Let me know in the comments section below!

What’s new on Netflix this September