Too many devices to control? You’re not alone. As our homes become personal networks riddled with connected devices, it’s supposed to get easier to control things — not harder.

If you’re fed up with finding the right remote, try this. SofaBaton makes a universal remote that caught our attention, and after running through everything this little wonder is capable of, we became instant fans. 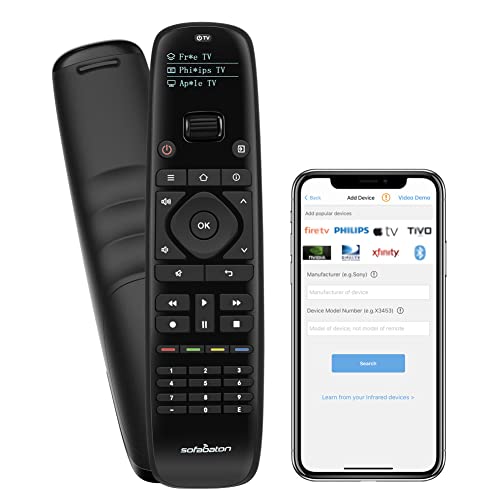 Pre-installed code works with over 500,000 devices

It’s about as simple as that. SofaBaton programmed this to work flawlessly with nearly everything you have in your home.

It’s pre-programmed for Apple TV, using your Xbox One, and most Roku devices. One thing to note: Apparently, the Roku Stick doesn’t agree with it.

It’s about as universal as you’re going to get, especially at this price point.

It’s very easy to misjudge the distance between the couch and the television. With 33 feet of range, there’s almost no chance that you’ll actually need to utilize all that distance.

SofaBaton’s remote connects via Bluetooth or IR, granting as many options as possible to start watching your favorite shows and movies.

That range is extended with the companion app for your smartphone. If you misplace the remote, the app takes over and gives you similar functionality in the meantime. Handy.

Program commands with your buttons

Utilize macro keys to perform up to 10 delayed actions with a single press of a button. This only works for your IR buttons, so a direct connection to the TV receiver is required.

Macro keys can have specific time delays, too. Program your buttons to carry out a string of commands, such as starting DVR and categorizing a specific show.

You can do just about anything with macro keys, even if that’s just surfing channels. We’re willing to bet this remote works harder than any you’ve owned before.

A bright OLED display makes it easy to read

See that little screen near the top? That gives you on-screen information. If you or a loved one have vision impairments, this makes channel surfing infinitely easier.

The bright OLED display shows you input information. Quickly switch between Apple TV or Fire TV with ease. In low-light situations with a bright screen backlight, the OLED mini display comes in handy.

It takes ages to wear out the batteries

Despite the onboard screen, the AA batteries required to power this pivotal piece of entertainment hardware don’t run out quickly. This depends on the type of batteries you use, of course. We recommend you use alkaline batteries since they have a longer shelf life.

Not enough control for you? There’s another option, by Logitech

If SofaBaton’s remote isn’t enough for you, Logitech has a higher-end option.

Logitech Harmony 650 Infrared All in One Remote Control (Silver)

With an increased range of up to 50 feet, integrated support for over 5,000 electronic brands, and a simple one-time setup via your PC, it’s a strong contender.

If you’re a far distance from your TV, the colorful integrated screen makes it easier to see what you’re doing.

There’s more control, but as you might have guessed, it comes at a higher price. Logitech never disappoints; they just know how much their solutions are worth.

3 smart ways I protect my dog and you should, too

5 clues that your email has been hacked

4 ways to know you should change your passwords