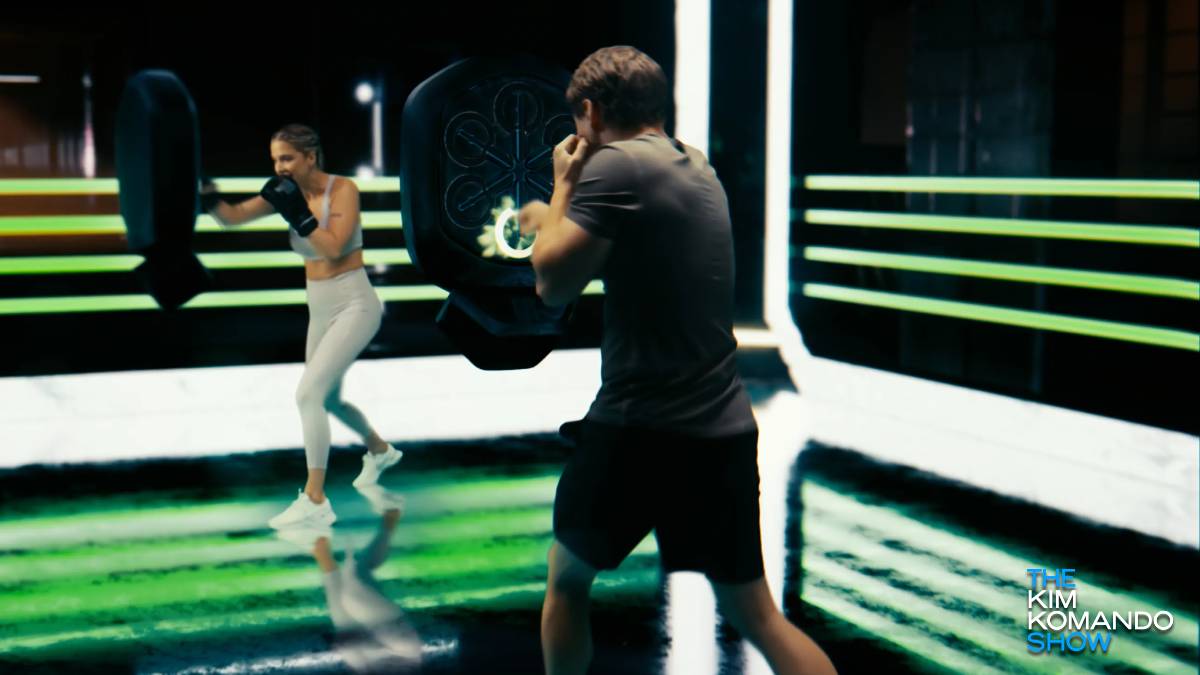 Working out at home has been all the rage for the better part of two years since the pandemic began. Even though the trend of buying expensive exercise equipment has slowed down, as illustrated by Peloton’s recent struggles, I think for the most part, home fitness is here to stay.

Then it comes down to a few factors: types of workouts you’re interested in, available space and how much you’re willing to spend. This review covers a specific situation for those who want interactive, trainer-led workouts without spending $1,000 and up on equipment — or figuring out where to put it.

How would you like to try boxing … in virtual reality? The soon-to-be-released Liteboxer VR is more fun than I expected.

The image above is NOT Liteboxer VR. These are the physical versions of Liteboxer already on the market, one that’s freestanding (starting at $1,695) and the other that mounts to a wall (starting at $1,495). Over the last couple of years, it’s often been referred to as the “Peloton of boxing.”

Both are equipped with what’s called the Liteboxer shield and its force-detecting LED light pads. You punch these pads to the rhythm of music, hitting specific targets as they light up. Think of it as a game that can make a routine workout more immersive and fun.

You can follow along with the trainer on a smartphone or mount a tablet onto a dock included with Liteboxer. Yes, there’s a monthly fee to access the features, but more on that soon.

Now that you’re familiar with how the existing Liteboxer setups work let’s move on to the company’s latest product, Liteboxer VR. Trading the big hardware for an Oculus (now Meta) Quest 2 VR headset, you’re placed in a virtual ring where you shadowbox a digital version of the Liteboxer shield.

Whereas Liteboxer had a gaming feel before, this really elevates it to that status. Here are some of the features and highlights of Liteboxer VR:

To use Liteboxer VR, the one thing you’ll absolutely need is Oculus Meta Quest 2 VR headset, which costs $299 for the 128GB model and $399 for one with double the storage. If you already have one, hopefully, you have a recently-made version that shipped with a silicone facial insert. I’ll explain why shortly.

While I’ve never tried the freestanding or wall-mounted Liteboxer, I do have some experience with real boxing classes I’ve taken on and off over the years. I’ve hit bags and practiced hitting moving mitts worn by an instructor. I’ve never really shadowboxed.

Still, the whole reason I had become interested in getting a VR headset in the first place was to hopefully find new motivation to work out with games like Beat Saber. It just so happens my family bought me my first VR headset recently, right about the time the Liteboxer VR preview was made available to try out.

The app’s user interface is pretty straightforward, and the first thing I wanted to try was the option for Punch Tracks. Just pick a song from a pretty robust library, difficulty (I chose medium to start) and punch away. Bon Jovi’s “Livin’ on a Prayer” seemed like a great place to start.

That’s me above trying out the game. Two things to note: You can ditch the controllers and just use the headset’s hand-tracking feature, which I did later. Those are weighted gloves I’m wearing (1 lb. each) to add a little resistance. This is the pair I ordered, which is a little on the snug side.

Note: Weighted gloves are okay, but I would advise against using wrist weights for any VR activity after seeing too many reports of joint and tendon damage.

Back to Liteboxer VR, I was genuinely impressed to see how vast its music library is, with about 80 or so songs to choose from. There’s a wide range of artists, from Blink-182 to Billie Eilish, covering decades of rock, pop, hip-hop and more.

Punching through random songs is fun but makes it feel exclusively like a game. The actual workouts are a different story.

Launching the Trainer Class option brings up a seemingly endless number of pre-recorded training sessions featuring different trainers, duration and genre-based playlists. What’s nice is that, like in an actual class, the trainer has you start with warm-ups like squats. You also get an overview of punch combos for the specific song coming up.

Unlike a real boxing class, you’re not learning much when it comes to proper form. And since these aren’t live classes anyway, you can’t exactly ask. So do your best to mimic the trainer’s movements.

Once the workout begins, just follow the beat, hitting the pad with the rhythm based on which one lights up. The hand-tracking in the headset worked well and registered most hits — although I did have trouble with uppercuts when instructed to strike a pad on the lower side of the shield. Sometimes the hits registered. Other times they were misses.

Even so, the classes were engaging and the trainers were great. I really hope that down the line, Liteboxer adds some live class functionality, even if it is open to a lot of users at once with no one-on-one instruction.

The downside of VR workouts

When a person exercises, they tend to sweat, right? Now imagine doing a relatively intensive workout with a bulky piece of tech strapped to your face. I’m not saying a VR headset will make you sweat considerably more than you would without one, but it does make the problem harder to deal with.

Earlier I mentioned making sure you have the silicone cover for the foam facial interface. It was part of a recall last year over users reporting skin irritation. You can get one from the company or buy a third-party option like this one.

That at least keeps the sweat from ruining your expensive headset but won’t keep it from making its way down your forehead and into your eyes. Another immediate Amazon purchase I made: a cheap pack of headbands. Trust me, you’ll be happy you did.

Is Liteboxer VR worth it?

I don’t have a lot of experience in the world of virtual reality and until I get more accustomed to it, I’ll admit that it doesn’t take much to “wow” me. But even if I had owned a VR headset a year or two before having experienced Liteboxer VR, I still think I would be as impressed as I am.

Liteboxer VR by itself is not enough of a reason to go out and buy a VR headset — especially if you have no interest whatsoever in virtual reality. On the other hand, if you’ve been thinking about getting into VR or already own a Quest 2, then definitely give Liteboxer VR a try when it’s released on March 3. Besides, it comes with a free 7-day trial.

The inconvenience of sweaty, burning eyes aside, a bigger issue to consider when putting on a VR headset for any reason is making sure you have plenty of space. There are plenty of stories about cracked TVs and broken light fixtures. An insurance firm in the U.K. even saw about a 30% increase in claims last year from damage involving VR headsets.

That’s only property damage. Imagine throwing a punch in VR but connecting with a very real steel pipe. Others playing various games in VR have tripped on furniture and landed awkwardly. Some have broken fingers. I even saw a recent report involving a broken knee cap.

I’m not trying to scare anyone away from VR, but operating in a clear space is an absolute must.

Get extra cash washing clothes with this app